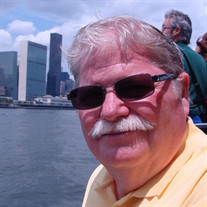 William "Bill" Averill, age 83, passed away in his home in Kennewick, Washington, on May 15, 2021. His passing was completely unexpected and his family and friends are left shocked and deeply saddened. Bill was born on October 13, 1938, in Seattle, Washington. After attending Centralia High School, followed by the local community college for several years, Bill decided to enlist in the United States Navy, where he served for many years. Following his service in the Navy, Bill and his son, Scott Averill, lived in Hawai'i for a short period where he worked as a store manager for the local Pay 'n' Save. Upon returning to Washington, Bill worked as a local vendor for many years, supporting several local outlets as well as the community. His most recent job was as the lead security screener at the Benton County Justice Center, where he served for over 20 years. Anyone who knew Bill, knew that he was an avid sports fan, including football and baseball. He loved to cheer on his favorite football teams, the Minnesota Vikings and the Seattle Seahawks, whenever he had the chance. His love of baseball also ran very deep. One of his very favorite players to watch was a close family friend, Hunter French; following him from Pee Wee League all the way to College. If Hunter played near the Tri-Cities, you better believe that Bill was cheering him on. Anyone could catch him keeping up with the most recent Seattle Mariners game. Whenever visiting his son, Scott, in Florida, you could find them cheering on any of their star teams, always being there to "root, root, root for the home team." While baseball was very important for the two of them, another very important aspect of their relationship was being able to experience the wonders of aviation at Air Shows and catching the Blue Angels whenever possible. Bill is survived by his: son, Scott Averill of Orlando, Florida; sister, Delores "Dee" (Marvin) Kjellesvik; nephews, Michael, Darrel, and Robert; lifelong friends, Mike Mahoney, Tim French, and Dorothy "Dot" French; and lastly, all of his numerous colleagues and friends. May he rest in peace. An informal celebration of life will be held at Benton County Justice Center on Friday May 28, 2021 in Courtroom E from 12:00 pm to 1:30 pm.

William "Bill" Averill, age 83, passed away in his home in Kennewick, Washington, on May 15, 2021. His passing was completely unexpected and his family and friends are left shocked and deeply saddened. Bill was born on October 13, 1938, in Seattle,... View Obituary & Service Information

The family of William Darrall Averill created this Life Tributes page to make it easy to share your memories.

William &quot;Bill&quot; Averill, age 83, passed away in his home in Kennewick,...