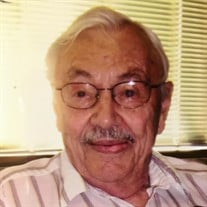 Willard LeRoy Nelson, 94, died peacefully at home in Kennewick, Wash. on December 7, 2019, the 78th anniversary of the bombing of Pearl Harbor. Since he was acknowledged and celebrated as being a part of the dwindling group of WW2 veterans, it was the perfect day for Willard to leave his earthly post. Thank you S1C Nelson for your service. Willard was born on November 3, 1925 to Elvin and Anna (Lee) Nelson in Gonvick, Minn. He was the sixth of seven siblings, and grew up on the farm and attended local schools and helped the teachers by lighting the fire in the wood stove before school started. He loved to talk about his early years of growing up in Minnesota with lots of embellishment. Willard was active in 4H, raising and showing cattle and sheep. In 1941, he was 16 years old and too young for military service. Five of his siblings heard the call, and joined various branches of the military. When he was old enough, Willard enlisted with the United States Navy and was stationed to the Pacific Fleet. He served aboard USS Topeka CL-67 and was deployed to the Western Pacific, including the Philippine Islands and along the coast of China supporting American forces during their tour. After USS Topeka returned from deployment, Willard was transferred to USS Iowa BB-61 deployed to the West Coast. While on the USS Iowa docked in Long Beach, Calif., Willard watched the "Spruce Goose" as it made it's maiden flight while on "boat duty" as a boat coxswain in the harbor. After his stint in the Navy, Willard returned home to Minnesota where he soon met his wife Joanne Hanson. The two were married on December 22, 1948 in McIntosh, Minn. They were active members of the rural Poplar Lake Lutheran Church in Fosston, Minn. Eight months after they got married, Joanne contracted polio in the world epidemic of 1949. Throughout this tragic ordeal, their faith stood strong and after her rehab, the couple went on to raise their three children moving from Minnesota to California in 1957, settling in Galt. They joined the Galt Lutheran Church (later to become Shepherd of the Valley Lutheran Church) where he was active in the men’s group and was a Sunday school teacher. While in California Willard worked for various farmers in the area, still enjoying life on the farm. The couple moved to Kennewick in 1984 and became members of Ascension Lutheran Church and First Lutheran Church, serving on the church boards. Willard was preceded in death by his wife Joanne; his grandson, Ryan Nelson; his parents; and all six of his siblings. Remembering his storytelling of the old days are his three children Lanny (Natalie) Nelson of Galt, Julie (Larry) Sell of Wilton, Calif. and Randy (Judy) Nelson of Kennewick. Also remembering him lovingly are his six grandchildren and many great grandchildren; along with a great number of nieces, nephews and friends. Internment will be alongside his wife at Poplar Lake Lutheran Church on Wednesday, December 18, 2019 at 11am with Pastor Andrew Virkus officiating. Arrangements provided by Mueller's Funeral Home in Kennewick, and Carlin Family Funeral Service in Fosston. A remembrance memorial for Willard will be held Friday, December 27, 2019 at Shepherd of the Valley Lutheran Church, 604 E Street, Galt, Calif. at 11am with Pastor Jerry Storrs officiating. We invite you to join us for refreshments and embellished storytelling in honor of Willard after the service. In lieu of flowers please send a contribution in Willard's name to the charity of your choice.

Willard LeRoy Nelson, 94, died peacefully at home in Kennewick, Wash. on December 7, 2019, the 78th anniversary of the bombing of Pearl Harbor. Since he was acknowledged and celebrated as being a part of the dwindling group of WW2 veterans,... View Obituary & Service Information

The family of Willard LeRoy Nelson created this Life Tributes page to make it easy to share your memories.