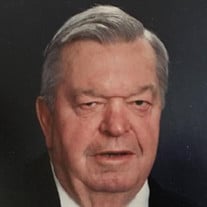 Wendell Lamoine Merrill died peacefully from the effects of Parkinson's Disease in his home on March 25, 2020 with his loving family surrounding him. On November 1, 1936 in Rexburg, Idaho, Wendell was born to Winfred W. and Elaine L. Merrill. Wendell attended grade school in Idaho Falls and Wilford. He graduated from South Fremont High School in St. Anthony, Idaho. Wendell was known for his athlete ability, scholastic skills, and good looks. At age 19, he married his high school sweetheart, Geraldine Garrett, age 17. A few days after the family found out that Wendell and Geraldine had eloped, they honeymooned to Moses Lake, Washington. With the suggestion of his uncle, they were encouraged to move to Washington to work. His uncle's goal was to help him to get started farming. Once the newlyweds moved to Washington, he secured a job with the US Bureau of Reclamation and was employed for 18 years. Wendell was a hard worker and wanted to provide for his family. In 1965, in addition to working full-time with the USBR, he started farming part-time. With the help of his two uncles he was given a sugar beet allotment to farm. Before long, he quit his USBR job, cashed in his savings bonds, and bought his first 70 acres of farmland. Within seven years, he bought two other properties and became a full-time farmer. Wendell's philosophy was to teach his children to learn the value of work. He wanted his sons to learn responsibility and at an early age taught them to milk the family cow and work together on the farm. Wendell's passion was hunting, fishing, and camping. He loved practical jokes, to tease (in a good way) and had an innate ability to tell stories and entertain. Wendell was the Master of Ceremonies at many wedding receptions and church functions. Wendell was a devout member and leader of the Church of Jesus Christ of Latter-Day Saints. His service included scouting, coaching softball and basketball, Sunday School teacher, youth leader and multiple other callings. He touched the lives of many members while serving as Bishop of the Columbia Basin Ward for seven years. In their senior years, Wendell and Geraldine served a two-year mission for his church in Fiji and another two years at the LDS Bishop's Storehouse located in Kennewick. Wendell is survived by his beloved and devoted wife, Geraldine. His children Tammara/Gary Ivers, Michael/Susan Merrill, Terry/Shelly Merrill, Bruce/Celynn Merrill and daughter-in-law Lisa Merrill. Wendell is also survived by his siblings Max/Louise Merrill, Sharon/Al Collins, Roger Merrill, Randall/Ramona Merrill, Danny Merrill. Family members that are waiting to greet Wendell on the other side of the veil are his mother and father, Todd (youngest child) and grandson, Cameron. His posterity include 24 grandchildren and 21 great-grandchildren. He is also survived by extended step-grandchildren, foster children along with many cousins, nieces and nephews that love him. Wendell was buried at Connell Cemetery on Friday, March 27, 2020 with close family members in attendance. Due to the Corona Virus outbreak, no funeral services were held, however, a memorial service will be held to coincide with upcoming family reunion planned in July.

Wendell Lamoine Merrill died peacefully from the effects of Parkinson's Disease in his home on March 25, 2020 with his loving family surrounding him. On November 1, 1936 in Rexburg, Idaho, Wendell was born to Winfred W. and Elaine L. Merrill.... View Obituary & Service Information

The family of Wendell Lamoine Merrill created this Life Tributes page to make it easy to share your memories.

Wendell Lamoine Merrill died peacefully from the effects of Parkinson&#39;s...