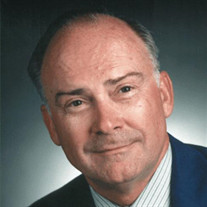 Death comes eventually, but it came too soon and too sudden for the family, friends and colleagues of longtime Tri-Cities businessman Bud Knore. Bud died Thanksgiving night in Kadlec Medical Center, defeated by a massive stroke. He was 77. Born Wendell Ray Knore on June 19, 1944, in Minford, Ohio to Woodrow (Pete) and Lillian Knore, both deceased. He had a servant’s heart - generous, kind and caring. He was a citizen extraordinaire in the communities he called home for some 50 years. Words like “tender-hearted, charitable, hard-working and dignified,” are among those used to describe the founder of the Bud Knore State Farm Insurance Agency in Kennewick. “With Bud, it was go big, or go home,” said his daughter. “He taught us all to work hard if we wanted to succeed and was the greatest role model of living life this way.” Bud grew up in the town of his birth, leaving when he went to Ohio State University. From there, he moved to California to work with a diamond drilling company. The drilling firm had work while the John Day Dam was being built and Bud moved to Goldendale and commuted. He later moved to Baker, Oregon, and in about 1967, he met a State Farm agent. The rest, as they say, is history. Bud worked awhile in Oregon and State Farm asked him to relocate to Richland. He jumped at the chance. He initially shared an office with another State Farm agent in Richland, and the family story goes that Bud was so busy going door-to-door to drum up new customers that when his daughter, Jennifer, was being born in Kadlec, Bud couldn’t be found to tell because he was door knocking somewhere. Bud had a 54-year career with State Farm and earned the company’s Crystal Excellence award and held the Legion of Honor status. Bud’s community involvement in the Tri-Cities has been long and constant. He was a councilman for the City of Richland and a member of the Chamber of Commerce. He was a charter member of the Columbia Center Rotary following a stint as a Kiwanis member. Rotary became a way of life for Bud. Club member Sondra Rader remembers that Bud often talked about “what it was like back then … before women were allowed.” He served that Rotary club as president, as a dedicated committee member and rarely – if ever – missed a meeting. He was the Club’s Christmas Elf. When he wasn’t serving Rotary or United Way or the Kennewick General Hospital Foundation, he and Marsha were off on another trip. They were active in an RV group. They traveled much of the world. They often visited Mexico with some of their grown kids. “There was always another adventure,” said his daughter. “We ziplined or para-sailed or went on tequila tours.” But it was whiskey that Bud really enjoyed. Bud and Marsha officially met for the first time in a State Farm parking lot. They were married by the late superior court Judge Al Yencopal on Aug 15,1987- and so began their 34-year journey. Bud’s survivors include the wife he adored and five children: Julie Nunley, Doug Jones (Salina), Kimberleigh Anderson (Todd), Darcy Knore and Jennifer Summit. There are also 11 grandchildren, 3 great-grandchildren, and sisters Dr. Edna Grace Claunch, Elaine McLaughlin, and Ginny Thompson as well as a large extended family. Visitation will be from 4-8 p.m. December 3 at Mueller’s Tri-Cities Funeral home, 1401 S. Union St. Mass will be at 11 a.m. on December 4 in St. Joseph’s Catholic Church in Kennewick with burial to follow in Desert Lawn Memorial Park. Masks are required. A reception will follow in the Columbia Center Rotary Event Center at Bingo Boulevard, 6222 W. John Day Drive with entrance on the west side of the Center. The Knore family asks that, instead of flowers, any who wishes to honor Bud donate to the charities he long supported: United Way, 401 N. Young St., Kennewick; Heartlinks Hospice and Palliative Care, 750 Swift Blvd., Richland, or to the Tri-Cities Cancer Center, 7350 W. Deschutes Ave., Kennewick.

Death comes eventually, but it came too soon and too sudden for the family, friends and colleagues of longtime Tri-Cities businessman Bud Knore. Bud died Thanksgiving night in Kadlec Medical Center, defeated by a massive stroke. He was 77. Born... View Obituary & Service Information

The family of Wendell "Bud" Knore created this Life Tributes page to make it easy to share your memories.

Death comes eventually, but it came too soon and too sudden for...