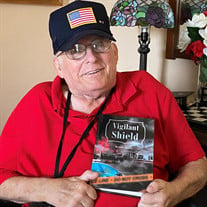 Walter “Gene” Morris, age 75, passed away unexpectedly at his home in Kennewick, Washington on Tuesday, December 15, 2020. He will be laid to rest at Riverview Heights Cemetery. Gene is now free from the constant pain he suffered the last two years of his life and walks again with our Father in Heaven. Gene was born in Yakima, Washington to his parents, Myrtle (Armstrong) and Edward Walter Morris. Gene attended school in Toppenish until enlisting in the United States Marine Corps in December 1964. He received the Purple Heart medal in recognition for injuries sustained while fighting in the Vietnam war. Following his tour of duty, he worked in electrical supply sales. After successfully raising his children he decided it was time for a change in profession and found his career driving a city bus for Ben Franklin Transit until his retirement in January 2012, always whistling while he worked. Among his favorite pastimes, Gene enjoyed studying the Bible, creating art with stained glass, fishing, golfing, spending time on the Oregon coast, finding treasure with his metal detector, and gold panning. He was forever looking for a new hobby to try. Gene always had big dreams and great ideas. His most beloved hobby was writing and telling stories and was so proud to finally have his dream of having a book published and in print, a goal that was achieved just this year. When he wasn’t watching old western movies, funny TV sitcoms, or conservative news programs, Gene could be found in his shop working on his hobbies with his “shop dog,” Lady, at his feet. He loved to dance, tell jokes, and sing, usually beginning every song with the lyrics “Down By the Riverside”. He cherished spending time with family and friends, gathering for holidays and any other social occasion. Gene will be remembered as very friendly, kind and generous, opinionated, helpful, and cheerful. He was always available to help out when asked. His passing is a great loss to his family and those that knew and met him. He was quite a force on this earth, and never knew a stranger. Gene is preceded in death by his parents, his brothers Joe and Eddy Morris, and sisters Dorothy Armstrong, Norma Sisson, Bobbie Zyph, and Nancy Voorhies. He is survived by his loving wife and best friend of 44 years, Sharon (Foster) Morris, his son, Christopher Morris, daughters Mechelle (John) Spangler, Crystal (Michael) Weatherbee and Courtney Morris. He was the proudest Papa to his grandchildren, Ashleigh, Nicholas, Jacob, Ethan, Benjamin and his newest roll of Papa the Great, to great-granddaughter, Lakelyn. Gene is also survived by his sister, Virginia, and brothers, Jim and Jack, and numerous beloved nieces, nephews, and cousins. His family meant the world to him. His family is grateful for the amazing care he received at OHSU in Portland and the VA Puget Sound spinal cord injury center, where he thrived markedly in his recovery in 2019.

Walter &#8220;Gene&#8221; Morris, age 75, passed away unexpectedly at his home in Kennewick, Washington on Tuesday, December 15, 2020. He will be laid to rest at Riverview Heights Cemetery. Gene is now free from the constant pain he suffered... View Obituary & Service Information

The family of Walter Gene Morris created this Life Tributes page to make it easy to share your memories.

Walter “Gene” Morris, age 75, passed away unexpectedly at his...