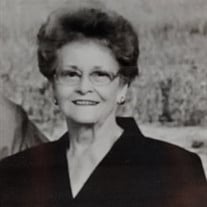 Nothing gives me greater joy than to hear that my children are walking in the truth. 3 John 4 On Tuesday, October 19, 2021 Martie Walteen Lynch (Cox) Corson 96 passed away, she surely created quite a stir in the heavenly realms bringing mischief and laughter in her wake. Walteen was born March 22, 1925 in Frederick, Oklahoma to Lewis Walter Lynch and Martie Olive (Glascock) Lynch. Walter and Martie were delighted to have a third daughter and dearly loved their three girls, Alma Isabel, Alta Lee, and Martie Walteen. Walteen was raised in the town of Frederick until the depression hit and they were unable to pay the property tax. At this point the family moved to the farm outside of town where Walter had homesteaded during the 1901 land rush. Walteen was a tomboy by nature and loved spending most of her youth shadowing her daddy walking the fields and riding the tractor. Alma and Alta were close growing up while Walteen was their thorn. She was a prankster and her sisters were easy targets. She knew her sister, Alta, was afraid of mice so when Walteen found a nest of baby mice in the field she took one and placed it in Alta's bed just waiting to watch her scream with fear! Alta retaliated by notching rings of fur on the tail of Walteen's cat. Walteen graduated from Hollister High School, a class of 30 students. She loved playing basketball on the all-girls school basketball team. World War II broke out as Walteen graduated from high school. Soon after she rode a train to Phoenix, Arizona to work in the Air Force hangar as a secretary. While working in Arizona, she was introduced to Charles Herman Cox, an airplane mechanic. Herman and Walteen were married June 17, 1944 in Victorville, California. After the war, they resided in OK with their two son, Rickey and Alan Cox. During that time, they bought a farm in the Block 1 Reclamation Project in Pasco, Washington. The Cox family drove across country from Oklahoma, anticipating their life as farmers. On the way they ran out of gas, another couple stopped to assist them by giving Herman a ride to the nearest gas station. Tragically, their car ran off the road killing all three. Herman's death was heartbreaking for Walteen and their two small boys. Ultimately, Walteen continued on to Pasco to farm her 40 acres of newly acquired land. While attending the First Congregational Church in Pasco, Walteen met John Baldwin Corson, who was a youth minister and owned a garage at the Richland Y. John and Walteen were married March 21, 1954 in the First Congregational Church in Pasco, Washington. John took great joy in adopting Rickey and Alan and it is told that Rickey asked his mother to marry John. This was the dawn of a 63-year marriage, spanning a growing family of 5 children, expanding farming operations, church and community service. Marla, Martie and John were soon added to the Corson family. Walteen was a mother who taught life lessons in a non-conventional manner such as she tied her little ones to a tree so they couldn't run into the road but when we were older and under foot told us to go stand out on Road 68 and look at the grill of a farm truck. The lesson of discernment and self-preservation! Walteen was a born story teller, some tales taller than others. She knew how to tell the truth…the smart way. She was an amazing cook; more mornings than not, a neighborhood farmer joined us for breakfast. Many parties were held, one year, Walteen served sweet but crunchy chocolate covered ants during their New Year's pajama party to unaware guests. Walteen cherished and loved her family and her friendships spanned decades. Walteen emulated the gift of service, participating as a 4-H leader and Block One Community Club President and member. A room mother for all five children, she was also on the Kadlec Foundation Board, was an active member of the Red Hat Society, Model A Club, Kennewick Kiwanis Club, Church Circle and volunteered for years in the Kadlec Hospital intensive care unit. Walteen's legacy is the importance of faith and family, time spent together making memories to last a lifetime and beyond as those are the stories we share. We are still wondering, Mom, who is truly your favorite child? Ranked favorite to expendable… Walteen was preceded in death by her loving husbands, Herman Cox and John Corson; parents, Walter and Martie Lynch; sisters, Alma Grant (Ben), Alta Green (Forest); niece, Kay Grant; great-grandaughter, Esme Bashaw and great-great-grandson, Dale Wagner. Walteen is survived by her five children, Rick Corson (Shanna), Alan Corson (Gail), Marla Thompson (Micheal), Marti Price (Noel) and Jon Corson (Natie); 13 grandchildren, Janae' Hansen (David), Michelle Hansen (Nathan), Shayne Locke (Heath), Jamie Wolcott (Rob), Alissa Wolbach, Bethany Alger (Nic), Ashley Bashaw (Jeffrey), Micah Thompson (Katrina), Vanessa Price, Collin Price, Emily Corson, Ashley Corson, Hailey Corson; 30 great-grandchildren and 6 great-great-grandchildren. Nephews, Sid Grant (Margie), Ron Green, Randy Green (Sue), and great-nephew and nieces. Due to Covid-19, a private interment graveside service will be held for Martie Walteen Corson at Desert Lawn Memorial Park Kennewick, Washington. We would like to convey our appreciation and thanks to the many loving caregivers of Home Instead, Home Care Solutions, Hospice and all those who provided devoted care throughout the last four years of Walteen's life. She enjoyed hearing your life stories and telling hers. In lieu of flowers, please donate to the Walteen Corson Scholarship, Kiwanis Club of Kennewick Foundation, P.O. Box 6291, Kennewick, Washington 99336.

Nothing gives me greater joy than to hear that my children are walking in the truth. 3 John 4 On Tuesday, October 19, 2021 Martie Walteen Lynch (Cox) Corson 96 passed away, she surely created quite a stir in the heavenly realms bringing mischief... View Obituary & Service Information

The family of Walteen L. Corson created this Life Tributes page to make it easy to share your memories.

Nothing gives me greater joy than to hear that my children are...