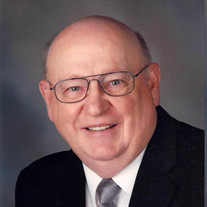 Vernon C. Alcorn April 13, 1942 - February 5, 2022 Kennewick, Washington - Vernon Charles Alcorn (79) of Kennewick, Washington, passed away on Saturday, February 5, 2022. Vern was born to Bernice Ellen (Lakey) and Lee Vernon Alcorn on April 13, 1942, in Umatilla, Oregon. He moved to the Tri-Cities at the age of 2. He graduated from Kennewick High School in 1961, and attended Columbia Basin Community College, receiving an Associate in Applied Science and later an Associate Degree in Arts and Science. Vern served his country in both the Army and the National Guard. He began a long career at Hanford in September of 1969 until his retirement as a Planner/Scheduler in May of 2003. In his younger days, he enjoyed painting, archery, and downhill skiing. During his golden years, he took up coin collecting, writing poetry, woodworking and especially enjoyed making and playing wooden flutes. He always had a new joke to tell. He is survived by his wife of 52 years, Gloria (Gatherum), his daughters Shellie (and Nat Kircher) and Julie Elaine, his grandchildren Rachel, Garrett, Bryant, and Hannah Caroline, his sister, Verna Lee (and Gary Williams), his niece, Kayla (and Rob Warner,) his nephew, Kevin Williams, grandnieces Macey, Hailey, and Emma and grandnephew Mathew. He is proceeded in death by his infant brother, Hershel Wayne, his mother, Bernice, and father, Lee. Services will be held in his honor on Saturday, February 12 at Mueller's Tri-Cities Funeral Home located at 1401 S. Union St. in Kennewick. Viewing begins at 10:30 am. Funeral service is at 11:00 am followed by interment at Desert Lawn Cemetery.

The family of Vernon Charles Alcorn created this Life Tributes page to make it easy to share your memories.