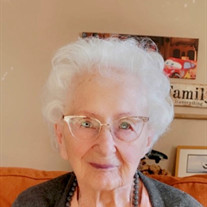 Verda Carney 1919-2021 Verda (Staab) Carney passed away at the age of 101 at home in Burbank, WA on July 29, 2021. She was born December 28, 1919 in Kalispell, MT, to Ernest and Stella Staab. She and her twin sister were the youngest of 8 children. She graduated High School from Flathead High and later attended business school. Verda married Ray Carney on October 25, 1941 they moved to Seattle and worked in the shipyards during the war and later settled in Kennewick in 1952. They had two children Ron and Cathy. Her children were her life. During their younger years, she was always following them to their activities, Ron's motorcycle races and Cathy's horse shows. Verda worked as a Bookkeeper/Office Manager for L.W. Vail Co. for over 20 years until they sold out and then followed the new company through a couple ownership transfers. During this time, she was very active in National Association of Women in Construction, she was a founding member of the local chapter and traveled yearly to their national conventions all over the country. She forged several special friendships as she and other members pushed for the rights of women working in the building and trades industry. Verda retired in 1982 at which time she and Ray became snowbirds and started enjoying their winters in Arizona. Each winter they would gather in Mesa with several friends from their earlier years in Montana. Verda had a huge heart, she was always available to help someone in need. Traveling was something she always enjoyed along with bowling, sewing, crocheting and crafts in general. She was always on the go, well into her 80's she continued to participate in her weekly bowling league, pinochle games and craft days with her friends. She is survived by her son Ron (Terry) Carney of Newport, WA, daughter Cathy (Wil) Ricard of Burbank, WA, 6 grandchildren: Randy (Tracie) Carney, Boise, ID, Christy (Mac) McNeil, Boise, ID, Wendy Carney, Olympia, WA, Jennifer (Mike) Pagh, Newport, WA, Chris (Amber) Ricard, Pasco, WA, Ryan (Tiffany) Ricard, Burbank, WA, 13 great-grandchildren (with another on the way), and 2 great-great-grandchildren. She is preceded in death by her husband Ray, parents Ernest and Stella Staab and all 7 of her siblings. A special thanks to her team from Chaplaincy Hospice Care for their compassionate care and help in her final days. Graveside service will be held at 10:00am Friday, August 6, 2021 at Desert Lawn Memorial Park.

The family of Verda Rosetta Carney created this Life Tributes page to make it easy to share your memories.