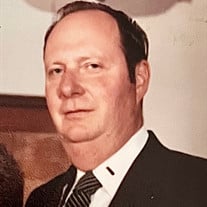 It is with great sadness our family announces the passing of Theodore Robert Hohl (Ted), 88, on November 14, 2021. He was born on July 9, 1933 in Glendale, California, and grew up in Beverly Hills. Ted served in the US Air Force in the early 1950's as an airplane mechanic stationed in Morocco. After leaving the military, he went on to own several service stations and became a Freemason in 1959. He was Worshipful Master of Beverly Hills Lodge #528 in 1964, and eventually was bestowed a Knight Commander of the Court of Honor as a 32nd Degree Freemason. Ted married his soulmate, Muriel, on September 18, 1961, starting their life together in California, and subsequently they were blessed with four children. He had an entrepreneurial spirit leading him through the years to become, first an insurance salesman, then later an auto parts salesman, which gave him the opportunity to travel all over the country. He then worked into becoming a contractor/developer. He relocated houses, built an office building, and then followed a building boom in 1972 to Missoula, MT, focusing on new home and apartment construction. Montana offered Ted a ready playground for his outdoor hobbies, hunting and fishing. He shared this passion with his family and his friends, and they all participated in these adventures. During his time there, he renewed his love of flying, eventually purchasing his own airplane. In 1975, the housing boom in the Tri-Cities, WA area called for another family move. This would be the last big move and the Tri-Cities became Ted's final hometown. In the Tri-Cities, Ted continued building new homes and apartment complexes, a part of his lasting legacy. In 1988, Ted suffered a major stroke. His life from this point on was changed forever. Over time he would overcome his new limitations. Ted studied several new languages, performed philanthropic work, travelled abroad, and enjoyed great food. Ted was dearly loved and is survived by his beloved wife, Muriel; children, Ted (Erica) Hohl, Theresa (John) Taffin, Tom (Tara) Hohl, and Tracy Gibson; several grandchildren; two great-grandchildren; and a niece and a nephew. He was preceded in death by his parents, Theodore and Anna Hohl, nee Demmert, and his two brothers, William and Thomas. A Celebration of Life will be held at 11AM on Friday, December 3, 2021 at Mueller's Tri-Cities Funeral Home on Union Street in Kennewick, WA. A graveside service at Desert Lawn Memorial Park will be held immediately afterward.

It is with great sadness our family announces the passing of Theodore Robert Hohl (Ted), 88, on November 14, 2021. He was born on July 9, 1933 in Glendale, California, and grew up in Beverly Hills. Ted served in the US Air Force in the early... View Obituary & Service Information

The family of Theodore Robert Hohl created this Life Tributes page to make it easy to share your memories.

It is with great sadness our family announces the passing of...