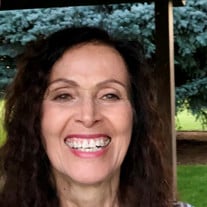 Sylvia Ann Dement, 69, of Kennewick, Washington, passed away on May 10th, 2022, after a courageous 12-year battle with breast cancer. She is survived by her husband Kevin; her daughter Stephanie; her stepchildren: Franklin, Jacquie, and Jessica; her four brothers: Aczael Jr., John (Teresa), Ray, and Joe (Angie); her mother Esther; stepfather Aczael Sr.; and many beloved nieces and nephews. Sylvia was preceded in death by her son Christopher and her father Manuel Plata. Sylvia was born on July 8th, 1952, in Corpus Christi, Texas. She moved to the Tri-Cities as a child and graduated from Riverview High School. She received a full academic scholarship to Washington State University. Sylvia started her career at the Federal Building as an executive secretary, later worked in a local law office, and eventually became a travel clerk for several Hanford contractors. Her early hobbies included snow skiing, water skiing, softball, and bicycling; but her passion was for sailing, and she competed in many regattas through the years. Sylvia was a devoted mother and found great happiness in raising her daughter Stephanie. Later in life, Sylvia joyfully volunteered for Team Read and in time was hired as the Program Coordinator. She loved teaching children to read and encouraged others to volunteer. Her later hobbies included organic gardening (especially cultivating beautiful orchids), cooking meals with ingredients from her garden, and raising chickens. She looked forward each summer to traveling with her husband in their RV, particularly to the Oregon coast and to visit her family in South Texas. She enjoyed spending time with her family in Finley, and around the Tri-Cities, especially as it grew larger over the years. She exuberantly led people to the Lord and wanted everyone to be saved. Her thoughtful guidance, kind heart, and generous spirit were influential in many people's lives, and she will be greatly missed by her family, friends, and husband of thirty-two years. Services will be held at Columbia Bible Church on May 20th at 1:00 pm.

Sylvia Ann Dement, 69, of Kennewick, Washington, passed away on May 10th, 2022, after a courageous 12-year battle with breast cancer. She is survived by her husband Kevin; her daughter Stephanie; her stepchildren: Franklin, Jacquie, and Jessica;... View Obituary & Service Information

The family of Sylvia Dement created this Life Tributes page to make it easy to share your memories.