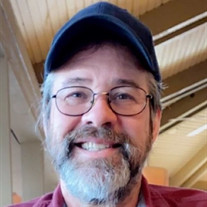 On Tuesday December 8th, 2020, Steven Ray, loving husband and father of three beautiful daughters, passed away at the age of 56. Steve was born on August 17th, 1964 in Havre, MT to James and Kari Ray. Steve graduated from CMR in Great Falls, MT where he participated in gymnastics, orchestra, and excelled in drama as well as pantomime receiving several state awards. He was in the Air National Guard for years and received an honorable discharge. Steve worked as a First responder on an Ambulance, Painter, Hod carrier for the Laborers Local 1636, Glazier, and Carpentry for many years before joining the IBEW Local 112 Apprenticeship in 1996. He was a 23-year member of the IBEW as a Journeyman Wireman. He was preceded in death by his brother, Michael Ray. Steven is survived by his wife of 35 years, Brenda Clough, Benton City WA; his children Alicia Davis, Kennewick, WA, Ashley Ray, West Richland, WA, and Ariel Ray, West Richland, WA; his parents James and Kari Ray, Irrigon OR; sisters Jamie Ray, Springfield, OR, Shelly Brannen, Marsing, ID; Grandchildren Phillip and Parker Davis; along with a host of loving in-laws, nieces and nephews, cousins, and longtime friends he made from all over the 48 states. Steve was an avid hunter during archery and rifle season, he loved fishing as well as his boat and ATV's. He had a passion for cars and loved his 1966 Ford Camper Special and spent many hours perfecting it. He enjoyed hiking and camping, and made numerous trips to the coast with his family and friends. The family had a private viewing. A celebration of Steve's life will take place this upcoming spring. Notification of the specifics will be made in advance. In lieu of flowers, the family requests that donations be made to the local food banks and or Mental Health America in Steve's name, in honor of his legacy of compassion and selflessness.

On Tuesday December 8th, 2020, Steven Ray, loving husband and father of three beautiful daughters, passed away at the age of 56. Steve was born on August 17th, 1964 in Havre, MT to James and Kari Ray. Steve graduated from CMR in Great Falls,... View Obituary & Service Information

The family of Steven Ray created this Life Tributes page to make it easy to share your memories.