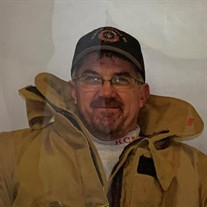 Steven Scott McClintock, 60, of Plymouth Washington, died unexpectedly at work on April 7, 2020. The cause of death was a heart attack. Steve was born on August 18, 1959, at Madigan General Hospital at Fort Lewis, WA. The son of James and Zora Ann McClintock, Steve quickly followed in his father's footsteps of "no fear" and trying just about every sport activity known to man, or if it didn't exist, inventing his own. Steve spent his early years going camping every summer weekend with his parents and siblings to the cousin's (Kinnan family) private lake in Camas Valley, OR. He would enjoy dirt bike riding, slalom and barefoot water skiing (or just riding on dad's shoulders while he did the skiing), zip lining, getting drug around by horses, or he and his brother just picking on their little sister because it was fun. Winter activities consisted of the family and friends meeting up in Cougar, WA to do weekend snowmobiling on Mt. St. Helens, of course this was before it blew! At the age of 14, Steve and his father moved to Eastern Oregon where his dad pursued farming. Eventually they ended up in Boardman, OR, where Steve graduated high school in 1978. From there, the pair moved to Umatilla, OR where Steve's dad started McClintock Transportation Barge Company and he and his younger brother Doug worked for their dad. A few years later Steve began work at AgriNorthwest in Plymouth, WA (across the river from Umatilla) and spent many years. Steve also lived on the premises, and at this time met his future wife, Susan Valandry. In keeping with his let's "GET ER DONE!" nature, the two eloped and married May 3, 1988 in Lake Tahoe, CA. Steve and Sue purchased their first and forever family home with a fantastic view on the Columbia River in Plymouth, WA in the early 90's where they raised their children Sean and Samantha. A week before Christmas in 1996 their family home burned down. As fate would have it, the help of the local fire department and all of the wonderful people who brought the family food, clothes, and essentials, led to Steve wanting to give back to his community. He became a volunteer firefighter and EMT, which the latter part was huge for him, the guy who could pass out at the sight of blood. His wife Sue served alongside him as First Responder. Steve loved this work and eventually became Fire Commissioner of the Plymouth Station. He was awarded 2012 Firefighter of the year for Benton County Fire District #6. Steve was also honored with the title of Captain, which was fitting in all aspects of his life. In his professional life, Steve spent the last 20 years working for Tri-City Grain in operations and maintenance; basically he was The Ring-Leader. In Steve's personal life, while he was still a young and single guy, he purchased his own ski boat and started "Steve's Ski School. This lead to wave runners, wind surfing, quads, street bikes, dirt bikes, dune buggies, kayaks, snowmobiles; the list could go on and on! This man was the epitome of, "What's the next adventure, let's do it!" and always with several friends in tow. Steve spent many weekend camping trips with family and friends to the coast at Sand Lake or Winchester bay riding the dunes with his quads. Even more time was spent going to the mountains for quading, dirt bikes, snowmobiles, and ending the day sitting around the campfire, with everyone taking a turn with the infamous Shotski (this was a requirement!). A few years ago Steve started the Thursday evening rides with a group who would get their motorcycles and just ride. He was a friend to everyone, always helping people out, giving riding lessons, and that boost of confidence that we all need sometimes. Steve also had a very creative and artistic side to him, who knew? Except his sister does recall him needlepointing at one time, and eventually he got ahold of a chainsaw which was met with big chunks of wood, and tada… the evolution of his Bears. Steve had become notorious for making a bear for everyone in his family to his friends. Some even got more personalized, like the OSU Beaver he carved for his mom who is an alumnus, and the Sea Turtle-Starfish-Octopus combo for his little sister Jenn. This man was an amazing husband, father, grandfather, son, brother, uncle, and friend to many. He is a legend. Steve is survived by his mother Zora Ann McClintock, his wife Susan McClintock, his son Sean McClintock, his daughter Samantha McClintock, two granddaughters Melody (Samantha) and Rian (Sean), his sister Jennifer McClintock, his uncle Gale McClintock, his uncle Jay McClintock, and several nieces, nephews, and cousins. He was preceded in death by his father James W. McClintock and brother Douglas J. McClintock. Following his wishes, Steve's ashes will be scattered in the mountains with his brother Doug sometime later this year. A Celebration of Life event will be held at the McClintock home after the coronavirus pandemic subsides, hopefully in August. If you want to make a donation in honor of Steve, please consider making a donation to Benton County Fire District #6.

Steven Scott McClintock, 60, of Plymouth Washington, died unexpectedly at work on April 7, 2020. The cause of death was a heart attack. Steve was born on August 18, 1959, at Madigan General Hospital at Fort Lewis, WA. The son of James and Zora... View Obituary & Service Information

The family of Steve Scott McClintock created this Life Tributes page to make it easy to share your memories.