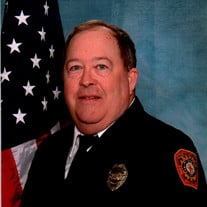 Steven Scott Bailie passed away on July 17th, 2020, in Richland, Washington, at the age of 68. Steve was born March 28th, 1952, in Pasco, Washington, to Beverly Williams and Samuel Eugene Bailie. Steve graduated from Pasco High School in 1971. He went on to serve in the United States Air Force. Steve married Kathleen McClain on March 18th, 1978. In 1978, Steve also began his 33-year career as a Firefighter for the City of Kennewick, retiring in 2011. Even in retirement, he spent his summers as an Incident Management Team Member helping fight forest fires throughout the Northwest. After 9/11, Steve was one of a few members of the Incident Management Team to immediately volunteer to help with the rescue efforts in New York City. Steve spent three weeks in New York, helping with the recovery efforts. During this time, Steve was exposed to what would eventually cause the cancer that ultimately took his life. Steve fought this final battle as he had every fight, head-on, with bravery and using all the available resources he had. Kathy was by his side every step of the way. Steve loved the Tri-Cities. He was actively involved in the community, frequently volunteering to help with major events. Steve was proud to be part of the first graduating paramedic class in the Tri-Cities. Steve was passionate about his career, and even in retirement, he always had his scanner on. Steve is preceded in death by his father, Gene Bailie. He is survived by his wife, Kathy Bailie; children, Bryan Bailie (wife, Kristi) and Laurie; granddaughter Madilynn Bailie; mother, Beverly Bailie; and sister, Jane Bailie. Graveside Services will be held at a later date. In lieu of flowers, donations can be made to the National Fallen Firefighters Foundation.

The family of Steven Scott Bailie created this Life Tributes page to make it easy to share your memories.