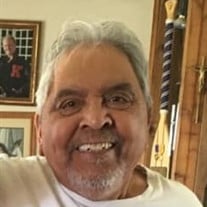 John (aka San Juan or Saint John) Villanueva was born April 23, 1949 in Vicksburg, MS and died at home Friday March 13th after a 5 year struggle with pulmonary fibrosis. His early years were spent in Louisiana, being born into a large family to parents Jose (Joe) and Antonia (Tony) Villanueva. The family moved to Texas when John was still a child then to Washington when he was a teenager. He learned how to work in cotton fields in Texas, taught by his dad and older siblings, gaining a strong work ethic from them all. His dad and older brothers also instilled in him a love of cars and working on them. John was not thrilled when his parents moved to Connell in 1966 with the youngest siblings. Always the dutiful son, he learned how to work in the fields of North Franklin County, eventually adjusting to then loving his new home. John was drafted and joined the United States Marine Corps in 1969. He served as Marine infantry in Vietnam in 1970 where he was wounded in action and awarded the Purple Heart. His combat experiences were intense, and his time in Vietnam both shaped him and haunted him until his death. Once a Marine, Always a Marine. After his time in the Corps, he returned to Connell then to Pasco. He eventually earned his GED then an AA in both automotive and diesel technology from CBC. He went to work for the City of Pasco, then worked for Boise Cascade Trucking and finally for Waste Management in Kennewick. He retired in 2004. John was a humble man of many talents, loved and held in high esteem by family members, friends, co-workers and neighbors. His love of family was amazing and beautiful; he was a blessing to all who knew him. Although he loved his entire family immensely, his grandchildren and great-granddaughter captured and held his heart. He was most proud of his role as their Papa. John was preceded in death by his parents Jose and Antonia, older siblings Trinidad Gonzalez, Beatrice Ybarra, Ustolia (Stella) Sanchez, Jessie Gonzales, Harry Gonzales, Erminia Vasquez and younger sister Mary Sue Villanueva. He leaves behind his loving wife Suzanne Alores (nee Southwick), children Eva Casperson, Steven Villanueba all of Kennewick, Kyle Southwick of Sunnyside and Michael Villanueva of West Richland; siblings Rebecca Pauley of Pasco, Janie Ramos of Portland, Manuel and wife Adelina Villanueva of Shallowater, TX, Augustine and wife Janie Villanueva of Connell and Frank Villanueva of Spokane; sisters-in-law Rose Gonzales of Pasco and Elena Gonzales of Anton, Texas. Missing their Papa are his most precious and beloved grandchildren Isabella Villanueba, Wyatt Hall, Kaiya Blank, Zoey Casperson, Skyler, Alexandria and Cynthia Southwick, Trinity Villanueva, Gunner Casperson, Kaydence Villanueva and great-granddaughter Layla Flores. John was a one of kind, amazing, generous soul whose departure has left a huge hole in our hearts. Godspeed Marine. Donations may be made in John's memory to Columbia River Young Marines, an organization he devoted much time and energy to and supported for over 20 years, leaving a lasting impact on many a youth in the Tri-City area. Columbia River Young Marines, 432 W. 20th Ave, Kennewick, WA 99337.

John (aka San Juan or Saint John) Villanueva was born April 23, 1949 in Vicksburg, MS and died at home Friday March 13th after a 5 year struggle with pulmonary fibrosis. His early years were spent in Louisiana, being born into a large family... View Obituary & Service Information

The family of St. John Villanueva created this Life Tributes page to make it easy to share your memories.