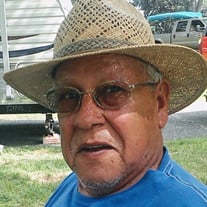 Simon Salinas Sr., a longtime resident of Pasco, passed away peacefully in his home surrounded by his loving children and his loyal dog coco on Monday morning, December 16, 2019. He was 80 years old. Simon was born October 28, 1939 to Biterbo and Filomena Salinas Sr. in Mathis, Texas. The family moved to Mabton, Washington in 1950 and the family eventually made their home in Granger where Simon grew up along with 16 siblings. Simon married Sarah Navejar in July 1958 and they made their first home in Granger. Initially, he worked in the orchards and fields of the Yakima Valley. After getting his GED, he worked at St. Elizabeth's hospital as an orderly. In 1965 he got a machinist apprenticeship in Seattle, where he worked for Boeing, then moved to Yakima and worked for Decoto Aircrafts, he also worked at Westinghouse Hanford, Lamb Weston, Moore's Machine Shop and Progressive Machine Shop. Simon truly enjoyed his work as a machinist. Simon enjoyed camping and hosting the yearly family reunions. Simon started the reunions in memory of his beloved mother. He loved having all his family around him. There would typically be around 200 or more family members at our reunions. He was an avid reader so much that he read the Britannica Encyclopedia from A-Z. He also loved his pets and was always heartbroken when they would pass. Simon is survived by 5 of his 6 children, Anita Barnard (William), Mary Alice Rodriguez, Simon Salinas Jr., Martin Salinas (Emily) all reside in the Tri Cities area. Suzanna Salinas resides in Yakima. His legacy will continue with his 14 grandchildren, 16 great grandchildren and 4 great great grandchildren. He was preceded in death by his parents Biterbo and Filomena Salinas Sr.; siblings: Jesusita Martinez, Antonia Gonzalez, Paula Estrada, Biolanda Salinas, Martina Salinas, Francisco Salinas Sr., Romolo Salinas, Biterbo Salinas Jr. also his daughter, Lucinda Blotz and grandson, John J. Barnard. Rosary will be held Friday, February 7, 2020 at 6:00 p.m. at Mueller's Greenlee Funeral home, 1608 W Court St., Pasco, WA. Celebration of life will be held Saturday, February 8, 2020 at 1:00 p.m. at Moose Lodge, 2617 W Sylvester St., Pasco, WA.

Simon Salinas Sr., a longtime resident of Pasco, passed away peacefully in his home surrounded by his loving children and his loyal dog coco on Monday morning, December 16, 2019. He was 80 years old. Simon was born October 28, 1939 to Biterbo... View Obituary & Service Information

The family of Simon Salinas Sr. created this Life Tributes page to make it easy to share your memories.

Simon Salinas Sr., a longtime resident of Pasco, passed away...