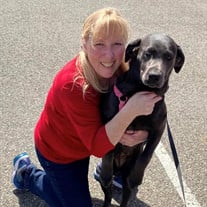 Sharon Lee Hughes Harkness age 66, passed away peacefully at home on Monday, June 28th, 2021 in Kennewick WA, after a long and courageous battle with pancreatic cancer. Sharon was born in Portland, OR on July 21st, 1954 to Carl and Edith Hughes, she was the oldest of their 3 daughters. Sharon was raised in Coulee Dam, WA and was a member of the first graduating class at Roosevelt High School in 1972. Sharon moved to Wilbur, WA in the early 1980's, and in 1990, moved to Kennewick, WA with her two sons after marrying Doug Harkness. Sharon and Doug had been married for 31 years at the time of her passing. In their time together, they raised their 4 children, played with grandchildren and great-grandchildren, watched numerous sporting events, and shared many wonderful adventures and experiences. One of Sharon's favorite things was traveling to different camp sites in their 5th wheel, where family and friends would often join in on the fun. If you were camping with Sharon, you could be assured of several things. There would always be dogs to greet you, good food, great music, lots of laughter, and one of the best Jell-O shots you'd ever have! Sharon began her lifelong nursing career while still attending Roosevelt HS and went on from there to work at Grand Coulee Hospital with Dr. Black. Over the years, Sharon worked at different clinics and in various specialties before retiring from Kadlec in 2020. Sharon was a compassionate dedicated nurse who was beloved by her patients, co-workers, and health care providers. Sharon was preceded in death by her parents, Carl and Edith Hughes. She is survived by her Husband Doug Harkness, Sons Travis Bowman, Jerred Bowman, Bruce Harkness, and Daughter Corrina Crum (Duane). Her Sisters Carla Hughes, and Kim Burghard (Mike). Nephews Billy Dolson and Tyler Burghard and Niece Shelby Haag and all of her beloved Granddaughters. Sharon's kind and loving spirit will be remembered by all who knew her, as she was truly a wonderful presence to be around. Per her request, no viewing or funeral will be held, however, a celebration of her life will be held at a later date.

Sharon Lee Hughes Harkness age 66, passed away peacefully at home on Monday, June 28th, 2021 in Kennewick WA, after a long and courageous battle with pancreatic cancer. Sharon was born in Portland, OR on July 21st, 1954 to Carl and Edith Hughes,... View Obituary & Service Information

The family of Sharon L Harkness created this Life Tributes page to make it easy to share your memories.