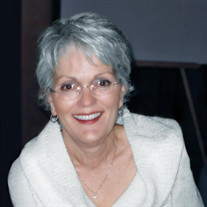 Sandra Lee Moore of Kennewick, WA passed away peacefully at home on February 15, 2022. Sandra was born on September 30, 1945 in Bozeman, Montana to Betty Marion and Donald Michael Edens. In 1947, Betty met and married James L. Manuel, who would raise Sandra along with 3 younger sisters, living briefly on the family farm in Fairfield, MT. In 1950 the family moved to Washington state, eventually settling in Kennewick where they lived until Sandy's junior year at Kennewick High School. In 1962, they moved to Benton City where she attended Kiona-Benton High School. While attending Columbia Basin College she met her one and only love, Preston Larry Moore while he was home on leave from the Marine Corps. At a Benton City dance she was asked to dance by that handsome Marine and her whole world changed. They married on June 21, 1964, and moved to Santa Ana, CA where Sandy went to work for Fender Guitar, meeting many musical celebrities. In 1969, Sandy and Larry were excited to start their family with the adoption of their baby boy, Eric. Sandy volunteered at the Children's Home Society, eventually becoming president of the local organization. She took great pride in the charity's work. In 1971, their daughter, Heather was born. In 1975 the family of four moved to Quincy. WA. A year later, they moved back to Kennewick where Sandy launched a 40-year career in the insurance industry by first working for AU Smith & Assoc. Insurance (now Monteith Insurance). She was beloved by her clients for her ever professional, kind, and caring service. Sandra and Larry bought their lovely little farmhouse in Kennewick in 1979. Holly was added to the family that year and Katie was born in 1985. Sandy was a welcoming hostess for countless family gatherings with pride in her spotless home and her beautiful yard. One of her favorite activities was gathering with her family on the Oregon Coast and walking on the beach with Larry and family. Everyone was welcome in Sandy's home and in her heart. She will be remembered for her motto "Just be Kind", which she practiced at every opportunity. Sandy is preceded in death by her parents James and Betty Manuel, Donald Edens and brother Mickey Edens. She is survived by her loving husband of more than 58 years, Preston Larry (Kennewick), children Eric Moore (Sean) of Portland, OR, Heather Moore of Vancouver, WA, Holly Williams (Justin) of Tacoma, WA and Katie Hummert (Christian) of Nehalem, OR; sisters Sheryl Moore (Ed), Susan Crowe (Jeff), Sally Quandt (Ron); grandchildren Logan Moore (Vanessa), Cuin Moore (Salvatore), Jaxom Moore, Lucca Williams, Frank Hummert and numerous cousins, nieces, nephews and loving friends. She is also survived by her beloved dogs Mac and Lucy. Memorial service: Saturday, February 26th at 11:00am at Mueller's Funeral Home, 1401 S Union St, Kennewick. Reception will follow at the family home. In lieu of flowers, donations can be made to the animal rescue charity of your choosing.

Sandra Lee Moore of Kennewick, WA passed away peacefully at home on February 15, 2022. Sandra was born on September 30, 1945 in Bozeman, Montana to Betty Marion and Donald Michael Edens. In 1947, Betty met and married James L. Manuel, who would... View Obituary & Service Information

The family of Sandra Moore created this Life Tributes page to make it easy to share your memories.