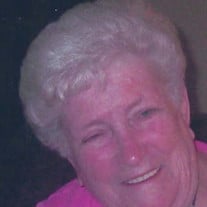 Sally left her earthly bonds peacefully Sunday, July 12, 2020 at 0545, just after sunrise at the Tri-Cities Chaplaincy. Sally entered the world as Teddie Marie on October 19, 1932 in Hulbert, OK. She was born during the Great Depression to Gerdie and Lester. Sally had one older brother (Bob), also born in Hulbert. She was raised on a farm where she learned the "pioneer spirit" which she displayed throughout her life of 87 years. Sally never knew a stranger; she had a very friendly, outgoing personality and always made the effort to be inclusive in social settings of new people. One tradition was always upheld in Sally's home, Black Eyed peas were served on New Years Day for good luck in the new year. In Sally's junior high and high school years, she played girls basketball and ran track. The nickname "Sally" was given to her during this time and stuck with her the rest of her life. Sally married Glenn Martin in 1950 and they honeymooned while riding a Harley Davidson Motorcycle. Sally had two sons: Jimmie Dean (Jim) and Marty Lee Martin. Sally and Glenn moved from Oklahoma to Florida in 1958 where they resided until 1973. During these years, she enjoyed the beach, SCUBA diving, and golf. She volunteered as a "Gray Lady" in elementary school, worked at the local library, and managed the Little League Baseball Concession Stand. She and Glenn moved to Washington State in 1973. They were divorced in 1982. Sally remarried in 1983 to Jessie (Robbie) H. Robison and they remained together until 2005 until Robbie's passing at the Veterans Hospital in Walla Walla, WA. Both Sally and Robbie were active in the local chapter of the Submarine Veterans and POWs. Sally remained a widow until her passing last Sunday, July 12, 2020. Sally was also a breast cancer survivor. In her younger years, Sally was also an avid fisherwoman and fish fry aficionado (great coleslaw), enjoyed crochet (numerous doilies and afghans followed through the years), and gardener (big beef steak tomatoes). Sally always had a love for the French Poodles (miniature) and bred them for many years. Later, Sally was active in the Red Hat Ladies and became a voracious reader. She also enjoyed Triple Yahtzee, crossword puzzles, word jumbles, scrabble and playing card games with friends at the Canyon Lakes Manor. Sally's mind was keen and active until her passing. Sally is survived by two sons, one stepdaughter (Kathy), four grandchildren (Heather, Jake, Jessica and Mattison) and three great grandchildren (Aubree, Brodie, and Golden). Sally's brother Bob proceeded her in death. In lieu of flowers, please make donations to the Tri-City Chaplaincy (Hospice House) as these wonderful individuals do God's work 24 / 7 / 365.

Sally left her earthly bonds peacefully Sunday, July 12, 2020 at 0545, just after sunrise at the Tri-Cities Chaplaincy. Sally entered the world as Teddie Marie on October 19, 1932 in Hulbert, OK. She was born during the Great Depression to Gerdie... View Obituary & Service Information

The family of Sally Robison created this Life Tributes page to make it easy to share your memories.