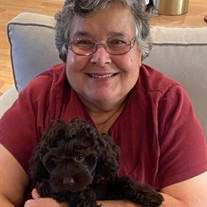 Sadie Jo Haff, of Kennewick, WA, passed away on her 69th birthday, August 31, 2020. She was born in Richland, WA to John and Olive Haff who impressed upon her a devotion that would continue long after their passing. Sadie's ceaseless preservation of her parent's memory was not lost on her family and friends. Those who knew her best were familiar with fond childhood stories, some mischievous, of her family dog Penny and the infamous stray cat Wampus. It may have been these early memories that forged her lifelong love of animals, and prompted the charity she provided for those less fortunate creatures in need of a helping hand and a loving heart. Sadie was a devoted Christian all her life, smart, and fiercely independent. She worked her way through school where she earned an undergraduate and master's degree from the University of Washington. This accomplishment would lead to a thirty-year career teaching language, arts, reading and history at Park Middle School. She loved to pass on her knowledge to those students who were willing to learn, and perhaps to some who were not so willing along the way. Upon retirement she worked several more years tutoring grade school children. Sadie was a reflection of her ancestry and heritage. She helped organize two reunions in Oklahoma with descendants of her great-grandmother, a Delaware "Lenape" Indian. Proud of her Delaware/Dutch/German ancestry, she became an accomplished genealogist in its study. She spoke German and would continue a fifty-year relationship with a pen pal friend in Deutschland. Wiedersehen, Lieber Freund. Sadie's love of music knew no bounds. She has played her dulcimer, mandolin, and violin with the Three Rivers Dulcimer Society. She participated in various recorder groups and even owned bagpipes that she endeavored to play. There were no lonely instruments in Sadie's home, they all deserved attention and care in her eyes. She loved to read, play board games, and travel until her health slowed her down. She would beat cancer twice but suffer from its remnants afterwards. Sadie is survived by her brothers, Lenard, Louis, and Stan. To her niece, nephews, grand-nieces, grand-nephews, and perhaps some younger friends, she was a notorious bear-hugger. Some of us that have been fortunate enough to know her for decades will remember her asking, "you're not too old for a hug are you?" We were never too old Aunt Sissy, and we never will be. We love you, and we miss you. To all her loved ones, family and friends, in lieu of flowers please send donations in Sadie's name to the Benton-Franklin Humane Society. The family invites you to sign their online guest book at www.muellersfuneralhomes.com .

Sadie Jo Haff, of Kennewick, WA, passed away on her 69th birthday, August 31, 2020. She was born in Richland, WA to John and Olive Haff who impressed upon her a devotion that would continue long after their passing. Sadie's ceaseless preservation... View Obituary & Service Information

The family of Sadie Haff created this Life Tributes page to make it easy to share your memories.

Sadie Jo Haff, of Kennewick, WA, passed away on her 69th birthday,...