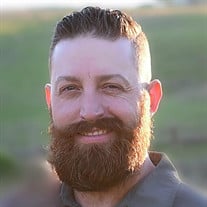 Ryan J. Stensland, age 37, a loving husband and father of three children, unexpectedly left this earth for his eternal rest in heaven on Wednesday, December 9th, 2020. Ryan was born in Portland, OR, on December 13th, 1982, to his mother Joni Hamilton and father Tim Stensland. He grew up along the shores of the Puget Sound in Kingston, WA and later as a teenager, moved to Marysville, WA where he made money doing carpentry with his Uncle Tim, and fencing with his friend Luke. In his early twenties he worked for a construction union where he did site grading and excavation work on major sections of the light rail system between Seattle and SeaTac, WA. He was promoted on several occasions for his knowledge, quality work, efficiency and ability to repair anything. In his late twenties he had an opportunity to attend OXARC for welding but without a GED or high school diploma he would be ineligible. His strong will and determination led him to enrolling in Columbia Basin College, where after only a year of classes he earned his high school diploma. He then attended OXARC for a two-year program, where he breezed through certification classes and graduated less than a year later. He worked on his custom design and made stabilizer platforms and mechanisms for the Microsoft server plant in Quincy, WA. He later landed a job with the City of Pasco where he was the go-to guy for manufacturing custom parts, and maintaining and repairing vast farmland irrigation systems. Ryan is also credited for the steel frame structure which the City of Pasco uses for its large Christmas tree of light located in Pasco City Hall. Ryan was very competitive and athleticism came easy to him. He played varsity basketball in high school where he was known as “Mr. Defense”, leading the team with the most steals in a season. He played basketball into adulthood, playing on a recreational league team with his dad and uncle Tim. As an adolescent and into adulthood, he had a love for skateboarding and snowboarding. He even acquired sponsorship for skateboarding while simultaneously being a drummer in a reggae band. He was never afraid to learn something new and quickly fell in love with motorcycles. He loved high speed tricks and endless burnouts; upgrading from Crotch Rockets to Harleys. Motorcycles were a substantial part of his life. He was a longtime member of the 50 Calibers, and spent countless hours working in the garage with his brother Dylan, perfecting their bikes. It was motorcycles that led him to Patchwork. His friends would drop off their jackets and Ryan would sew patches onto them with his grandma’s old sewing machine while blasting Metallica. In July 2007, Ryan and his friend Zane rode to Soap Lake, WA for the “Lava Love Run”. They were there to enjoy the show and maybe throw back some cold ones. They ended up in the Del Red Tavern where paths crossed, and Ryan met Sonya, the love of his life. Ryan and Sonya always had fun together. They played Co-Ed softball (Bad News Beers) and Co-Ed volleyball (Hit List) for several years. Whether win or lose they’d always end up at the pizzeria bar down the street with the whole team after the game. Ryan married Sonya in July, 2011 and shortly after, moved to the Tri Cities (Eastern Washington) where they bought acreage in the country, naming it Stensland Ranch. To summarize his life properly is an impossible feat. There was nothing he couldn’t do and his many talents and careers were an example of that. He was the definition of an autodidact and left no stone unturned. Family meant absolutely everything to him. His friends became his family too and he had a gift for pouring into the hearts and lives of all lucky enough to be a part of it. He held an unshakable conviction for being exactly where he was needed, unknowingly pouring his heart into making sure yours was always taken care of. If you were to play a highlight reel of Ryan’s life you would see him for everything he was: a faithful Christian, a loving husband, a devoted father, a dedicated brother, a loyal son, a fun uncle and the most committed friend. Ryan is survived by his wife, Sonya Stensland (Montelongo); children, Elijah, Solena and Annaleigh; dogs, Harley and Ruby; his mother, Joni Hamilton; his father, Tim Stensland; his brother, Dylan Stensland; his sister, Crescenda Iriarte (Josh); his brother, Thomas McClanahan; his sister, Madeline Hamilton; his many extended family members and friends. He is preceded in death by his Grandpa Bob Stensland, Grandma Pat Stensland; Grandpa George Hamilton, Grandma Phyllis Hamilton ; Uncle Mark Stensland. He touched the lives of everyone who knew him. Even in his death, we have witnessed the rare and special man that he was by the outpouring of love and support from all of his family and friends. His bright light he shone while on this earth is now an anchor in heaven. Rest easy Ryan.

Ryan J. Stensland, age 37, a loving husband and father of three children, unexpectedly left this earth for his eternal rest in heaven on Wednesday, December 9th, 2020. Ryan was born in Portland, OR, on December 13th, 1982, to his mother Joni... View Obituary & Service Information

The family of Ryan Jon Stensland created this Life Tributes page to make it easy to share your memories.