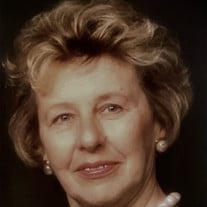 Ruth Ann Witwer, 83, of Kennewick, died on Monday, January 4, 2021, after a long illness. Ruth was born in Yakima, WA on July 23, 1937, but spent most of her early years in Ballard, WA, graduating from Ballard High School in 1955. After a stint in the US Navy, where she was stationed in the Secretary of the Navy's office at the Pentagon, she met and married her husband, Samuel E. (Eddie) Witwer, also a Navy man. She devoted the next 25+ years to supporting his career while raising their three children, Dale, Gail, and Keith Witwer. She was active in the Navy Wives Club and made homes out of many a military-assigned house from San Diego to Oak Harbor, WA, to Kodiak, AK and Yokosuka, Japan, finally ending up in Kennewick in 1975. Until retirement in the early 2000s, Ruth worked a variety of office jobs, but most enjoyed her tenure as the store manager of Biagio's Luggage at the Columbia Center Mall. She loved working in a retail environment and helping people select just the right luggage or gift item. After retirement, she and Eddie made many trips to visit family and friends throughout Washington and beyond. She loved to jump in the car and head off to someplace unknown, or to visit a winery and stock up on her favorite wine. She had a tender heart, but also maintained a rather sarcastic sense of humor and loved to tease. She loved to grow large, lush flowerbeds, and was particularly fond of hybrid lilies. Ruth was a devoted grandmother to her grandchildren, Dale (Alisha) Witwer II, Christine (Matt) Rinard, John (Jayme) Witwer, and Daniel Witwer, and great-grandchildren Brooklynn and Jacob Rinard, and Brycen and Aaron Witwer. She is preceded in death by her parents Arthur Hardies and Beata McGuire, and her son, Dale Witwer. She is survived by her husband, Samuel E. Witwer, and her children Gail (Marion) Carver, and Keith (Shelley) Witwer, her grandchildren, and great-grandchildren. She is also survived by a brother, Donald Hardies, and numerous nieces and nephews.

Ruth Ann Witwer, 83, of Kennewick, died on Monday, January 4, 2021, after a long illness. Ruth was born in Yakima, WA on July 23, 1937, but spent most of her early years in Ballard, WA, graduating from Ballard High School in 1955. After a... View Obituary & Service Information

The family of Ruth Ann Witwer created this Life Tributes page to make it easy to share your memories.