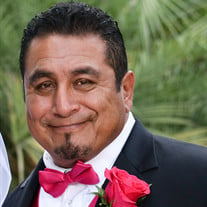 Ruben Anthony Trevino of Pasco entered into the arms of his Lord and Savior Jesus Christ on Tuesday, August 3, 2021 in Seattle, Washington. Ruben was born on January 13, 1964 to Arthur and Estrella Trevino in Prosser, Washington. He was one of 3 children. Ruben and his siblings, Angel Trevino and Cynthia Godman (Trevino) were raised by their parents in Prosser, Washington before moving to Grandview, Washington where they lived their childhood years. Ruben later moved to the Tri-Cities in 1996. Ruben lived a very full life both personally and professionally. He was passionately dedicated to his family, career, and faith with the seamless ability to serve them all without sacrifice to any. Ruben grew up understanding discipline and hard work. Ruben started his career as a Power Operator at the early age of 20 at the Hanford Site and through his 37 years there, had many promotions and was a Manager for Central Plateau Cleanup at the time of his passing. While Ruben lived a very long and rewarding professional life, the part of his life that meant the most to him was his family and his two little Dachshund babies, Max and Royce. Ruben aka "Kong" and the "Gentle Giant" had an infectious smile that could light up a room and a devious little smirk that would always make you smile or laugh. Ruben owned every room he walked in to, his presence was magnetic. Ruben had a way of making everyone feel special by his ability to make time for every single person in his life. Ruben was everyone's favorite and always had a positive outlook on life. Ruben had the biggest heart and definitely was one of the good ones! He was always there for his family and friends whether it was to lend an ear, a helping hand, or give one of his amazing hugs. Ruben had a lot of hobbies he enjoyed, but none more than fishing and playing softball with his buddies. Ruben's second home was at the gym, he enjoyed working out every day and building those big muscles of his. Ruben loved our Lord and Savior Jesus Christ and was dedicated to serving him and bringing others to know him. Ruben was known for his inner joy, strength, bravery, kindness, his laughter, his radiant smile, and unconditional love for everyone. Ruben left a positive lasting legacy behind in the way he chose to live his life and how he treated his family, friends, and anyone that had the privilege of knowing him. Ruben is preceded in death by his parents Arthur and Estrella Trevino, Ruben is survived by his brother Angel Trevino and sister Cynthia Godman (Trevino). He is also survived by numerous aunts, uncles, and cousins. Ruben, we know this is not a final goodbye because we know we will all be together again one day in heaven. Thank you for always being an amazing brother that was loving, caring and always giving of your unconditional love. We love you and miss you beyond words... Angel and Cynthia The family would like to extend a big thank you to the doctors and nurses at Central Washington Hospital for their dedication in caring for our brother during his time there. At this time, Memorial Services and a Celebration of Life for Ruben are being postponed until a later date.

Ruben Anthony Trevino of Pasco entered into the arms of his Lord and Savior Jesus Christ on Tuesday, August 3, 2021 in Seattle, Washington. Ruben was born on January 13, 1964 to Arthur and Estrella Trevino in Prosser, Washington. He was one... View Obituary & Service Information

The family of Ruben Anthony Trevino created this Life Tributes page to make it easy to share your memories.

Ruben Anthony Trevino of Pasco entered into the arms of his Lord...