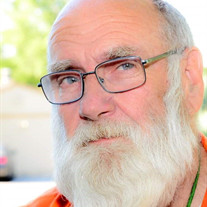 RONNIE CHESTER MARTIN January 31, 1947 - February 23, 2020 Ronnie "Ron" Martin passed away with family by his side at Sacred Heart Hospital, Spokane. He will be missed by many people who his life touched. Born in Bakersfield, January 31, 1947 to Rhodena Edna Avants, and Chester Alonzo Martin. Born premature at 6th months, fitting into a shoe box, he was a fighter arriving in this world and a fighter going out. His family was large, having 7 sisters, and a younger brother. He entered the military in 1967. He was assigned to 3rd Squad, 7th Calvary, stationed in Germany. He was on guard duty at border when Russia invaded Czechoslovakia. Ron served as a vehicle mechanic working on tanks and wheeled vehicles. He served in a black Ops unit in Germany. He was a Recovery Specialist. He obtained the rank of Spec 5, and was award two "Gary Owens" awards for service above and beyond. In 1973 he met Pamela Blumer-Ireland. He always said he knew he was going to marry her from the day he saw her. September 1974, he was married with a ready-made family of Christopher (4), and David (2) whom he later adopted as his own. In June 1975 had a daughter, Stefanie, born premature. In September 1976, a son Jason was born. Ron worked at Twin City Foods for awhile loading box cars and driving forklift. Looking for something which would support his family he started work at the U.S. Post Office. He eventually worked his way from letter carrier at the Columbia Center Mall to a Supervisor in Pasco, to working in Sunnyside, Walla Walla, acting Post Master of Othello, and to Prosser where he was the Post Master for a number of years. Ron's kept the Prosser Post Office at the top of the district performance list. He won numerous plaques, and awards. His favorite days were spent with his grandkids and adopted grandkids. They all loved "PA". He took them to the park, to the dams to watch fish go through, to the Jump Park. He was so proud of all of them. Ron started to work at the mall as Santa in 2015. He had wonderful stories to tell about the children. He was quick to respond to their questions, so no questions about reindeer or elves went unanswered. He told them reindeer were shy so no one could see them on the roof. He had pictures taken with people who were 101 who had never had a Santa picture ever. He held day old babies for pictures. He made believers out of the ones who doubted there really was a Santa. Preceded in death by his father, Chester, mother Edna, sisters Lora, Esther, Ruth, daughter Stefanie. He is survived by his wife of 45-1/2 years, Pamela, son Christopher, David and Jason (wife Sarah and son Logan). Grandchildren, Patrice Ammons, Amanda Gardner, William Gardner, JT Gardner, Christina Martin, Stephanie Martin, Johnell and Kyle (son's Ryker and Sawyer) , Kayla (son Jaden Jimenez). Alicia (son Cody), Malinda ( children: Jenny, Adrian, Iyana Vasquez) Brother Leroy Martin (wife Susan) of Kennewick, Shirley Morgan, Medford, OR., Eveyln Bowman, Medford, OR., Geneva Franks, Springfield, OR. Anita Beddard (husband Jeff) Rathdrum, Idaho, numerous nieces, nephews.

RONNIE CHESTER MARTIN January 31, 1947 - February 23, 2020 Ronnie "Ron" Martin passed away with family by his side at Sacred Heart Hospital, Spokane. He will be missed by many people who his life touched. Born in Bakersfield, January 31, 1947... View Obituary & Service Information

The family of Ronnie Chester Martin created this Life Tributes page to make it easy to share your memories.