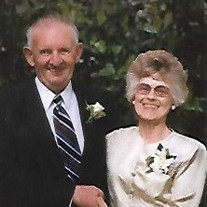 Ronald D Hanson was born on June 20, 1930, the only child of George R and Ethel A Hanson (nee Calmer). The first 16 years of his life were spent in Sioux City, Iowa, among a large extended family. During the winter of 46/47 with blizzards raging across the Great Plains and in the Rocky Mtns, Ron drove his mother west to Ritzville, WA, to join his father. Ron was a member of Ritzville High's basketball team that competed in the 1948 state tournament. He graduated from Ritzville High in 1948. Ronald and his mother moved to Spokane, WA later that year and he enrolled at Gonzaga University. While at Gonzaga, he had a blind date with Loretta Hentges, a nursing student at Sacred Heart School of Nursing. On July 26, 1952, Ron and Loretta were married. Immediately after graduating from Gonzaga in January 1953, Ron accepted a teaching position in Kennewick. During his 39-year teaching career, he taught 5th and 6th grade at Fruitland and Westgate Elementary impacting thousands of young lives. Ron loved to golf calling himself "a duffer." He got his hole-in-one in December 2002 at Sun Willows Golf Course. His other passion was reading. Often times, he would read 5 books (mostly nonfiction) during the same time span, two news magazines a week, and a daily newspaper. However more than anything else, Ron was happiest when surrounded by his family. He was famous for having a Christmas Eve pizza party for everyone in the family. His favorite part was passing out Christmas gifts. Ron was preceded in death by his mother, Ethel A Oehlwein, and his father, George R Hanson. He is survived by his wife of nearly 69 years, Loretta; daughter, Debra Winkelman; daughter and son-in-law, Denise and Tom Mileson; and grandchildren, Dan Zuniga, Pat Zuniga, Nick Mileson (Sarai), Kristi Mileson, and Andy Mileson (Ashley). Funeral Mass will be Tuesday, March 23, at 11:00 a.m. at St Joseph's Church, Kennewick, with Father Richard Sedlacek officiating. In lieu of flowers, donations in his honor may be made to the Children's Reading Foundation of the Mid-Columbia, 1229 W 22nd Pl, Portable P-3, Kennewick, WA 99337.

Ronald D Hanson was born on June 20, 1930, the only child of George R and Ethel A Hanson (nee Calmer). The first 16 years of his life were spent in Sioux City, Iowa, among a large extended family. During the winter of 46/47 with blizzards raging... View Obituary & Service Information

The family of Ronald Dean Hanson created this Life Tributes page to make it easy to share your memories.