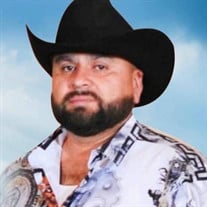 Rogelio “Roy” Lopez, of Finley, WA passed away Wednesday, December 16, 2020, in Kennewick, WA at the age of 46. Born September 15, 1974, in Pasco, WA. He is the son of Jose David Lopez Sr. and Alicia Gonzalez and Marylou Mendoza. Roy was raised here in the Pacific Northwest. He attended Stevens Middle School and Pasco High School. When Roy reached a working age he would go work with his dad at Tommy’s Steel and Salvage. Roy enjoyed helping his dad on the farm (Rancho La Yerba Buena) with the bulls and helping out in the summer with the rodeos. He was a people person always making friends wherever he went. In 2002, Roy and Ira met and became friends; started dating in 2004. On July 16, 2011, they got married. Roy, his wife and kids are members of the St.Joseph Catholic Parish in Kennewick WA. He worked in many trades; his last job was truck driving with AGB Trucking, LLC de Othello, WA. He enjoyed the open roads and the Pacific Northwest scenery. He worked so hard to provide for his children and wife. On his days off he dedicated his time to his family, and friends. He always had a good sense of humor making people laugh with his silly jokes. He will always be remembered for his good heart, always went out of his way to help family, friends, and strangers. It didn't matter the time of the day he was there to lend you a hand. In the past year he was working hard to meet his goal to buy their dream home. He enjoyed working on his automotive projects with his son, David. When he had spare time, he would get on his Victory Motorcycle and ride solo or with his wife. He is survived by his parents, his wife Iracema “Ira” Zamora; his children Leilanie Zamora, David, Yocelyn and Alonzo Lopez. Also survived by his siblings David Lopez Jr, Brenda Lopez, Dora Lopez, Eric Gurrola and step sister Lee Mendoza, and all his nephews and nieces.

The family of Rogelio Lopez created this Life Tributes page to make it easy to share your memories.