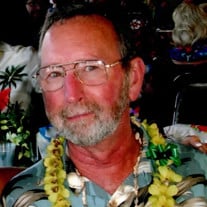 Robert John Smith, 76, passed away on May 5th, 2022, In Kennewick WA., surrounded by his loving wife and family. Robert is survived by his wife Beverly Smith, of Kennewick WA., His son Richard Smith of Spokane WA., his daughter Melanie Smith of Spokane WA., his stepson Eric Putnam (Shelle Putnam) of Moses Lake WA., his stepson Beau Putnam (Hollie Putnam) of Hermiston Or., his 4 sisters, Janet Bailey, Diane Clark, Judy Gemmrig and Jenine Hurley, his 8 grandkids, 2 great grandkids and numerous other relatives. He is preceded in death by his father Lowell Charles Smith, his stepdad Marvin Hurst, and his mother Edna Lee Smith Hurst. Robert was born February 24th, 1946, in Spokane WA, to parents Lowell Charles Smith and Edna Lee Smith. He graduated from Moses Lake High School in 1964. He studied at Eastern Washington University where he was pursuing an accounting degree. In 1965 he enlisted in the United States Navy where he served as a corpsman. During his time as a Naval corpsman, he provided medical efforts and assistance during the Vietnam War. During his time in the service, he experienced an injury where he was sent home and retired from active service. After his service he continued to pursue his accounting degree. Robert discovered a love for the outdoors, fishing, hunting water skiing and participating when he could in the Bloomsday Run. Robert worked very hard in his retail management career in various clothing and sporting goods. Robert loved to share these talents with his grandkids. Robert was a kindhearted family man, and dedicated putting others above himself. He has left a positive impact on the family around him and will continue to be a center piece of conversation for years to come. He will be truly missed, but his legacy will live on. Robert's funeral service will be Monday May 16th at 2pm at Mueller's Tri Cities Funeral Home 1401 S. Union St., Kennewick Wa. 99338.

Robert John Smith, 76, passed away on May 5th, 2022, In Kennewick WA., surrounded by his loving wife and family. Robert is survived by his wife Beverly Smith, of Kennewick WA., His son Richard Smith of Spokane WA., his daughter Melanie Smith... View Obituary & Service Information

The family of Robert Smith created this Life Tributes page to make it easy to share your memories.