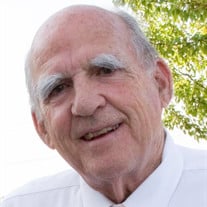 In Memory Of Robert William Reid (1924-2020) Robert William Reid (Bob), 95, of Kennewick, Washington, passed away on 16 March 2020 at Kadlec Regional Medical Center in Richland, Washington. He resided at Hawthorne Court in Kennewick. A graveside service for close family members was held on Friday, 20 March 2020 at Desert Lawn Memorial Park, 1401 South Union Street, Kennewick, Washington. Arrangements were by Mueller's Funeral Home, Kennewick, Washington. Bob was born in Portland, Oregon to Ralph Reid and Marjorie Reid (Turner) on 16 April 1924. He graduated from Newberg Union High School, Class of 1942, Newberg, Oregon, lettering in football, wrestling, and track. He was also involved in student clubs such as the lettermen's club, Pep club, Tiger Knights, President of Hi-Y, chorus, band (tuba), National Honors Society, and Parliamentarian Club. He also served as Vice President of the ASB. He was chosen by his classmates as Co-Valedictorian. He started college at Oregon State College in Corvallis, OR on a scholarship. In the spring of 1943, he enlisted in the United States Navy aviator program The U.S. was in the middle of World War II. As a new cadet, daily ground and flight training got him in the air and he was able to solo after six lessons. He stated, "It was a little scary the first time I had to land but after that it was great". He really liked flying, however, during a dog-fighting exercise he survived a mid-air collision, climbing out of his cockpit and safely parachuting to the ground - his first and only jump. Naval air training started in Baker, Oregon, with subsequent training in Del Monte, California; Livermore, California; Corpus Christi, Texas; and Vero Beach, Florida. He was commissioned an Ensign after earning his wings at the age of 20. On a two-week leave, Bob traveled roundtrip to Portland from Vero Beach, FL by train to marry Lucretia Lorene (Lorry) Agee (age 20) on 19 July 1944 in Dallas, Oregon. They met in High School when Lorry picked his photo from a year book to go on a double date with her friend who already had a date. After a time, Bob and Lorry began writing each other and kept in touch by mail while he was in training. Regarding his marriage plans, Bob commented, "In fact, one or both sets of parents thought we were 'damn fool kids'. Perhaps we were, but we have never regretted it." They both traveled by Greyhound to Portland and then back to Florida on the train with little or no money left but pocket change. Bob's aviator training continued in Vero Beach, followed by training in Providence, Rhode Island; Key West, Florida; and finally, Hawaii. Bob completed his carrier landings including "on Jeep-Carriers, the short carriers" and then continued night fighter training. He said, "I did night landings, which were really scary. All you saw was a florescent paddle. You are under the flagman's control." After Bob's training he was shipped out to serve in the Pacific Theater of World War II, stationed on the island of Saipan, in the Northern Mariana Islands. He was assigned to the aircraft carrier, the New Lexington. His primary duties were night patrol. They were assigned to be part of the planned invasion of Japan in the fall of 1945 but fortunately for him, two infamous bombs were dropped on Japan in August 1945 which ended the war, and minimized his involvement with combat missions. Bob chose to be discharged after his tenure in the Navy, returning on the GI bill to complete his college education. Bob graduated from Oregon State University, Corvallis, Oregon with a degree in Chemical Engineering in June 1950. He worked at the Hanford nuclear reactor site in Richland, Washington where the reactors served the dual purpose of producing electricity and producing nuclear weapon grade plutonium. Bob's job was to supervise the engineering of an "all metal pump" to replace the fragile glass pumps being used in the separation of gas and metal in the production of tritium from lithium. He also worked on establishing and maintaining the safety standards for the nine nuclear reactors at Hanford. He started as a Process Engineer, became the group leader over all process engineers, and subsequently was promoted to be the Manager of Process Technology. His team made significant improvements to the energy production of reactors as well as water treatment processes used worldwide. Bob and his growing family lived in Kennewick until 1971. He supported all his children as they became involved in jacks, wrestling, swimming, diving, band, gymnastics, cheerleading, activities in church, scouting, and jobs. He taught them primarily by example. He moved to Maryland in 1971 and worked for the Nuclear Regulatory Commission in Washington D.C. until 1981. He then moved back to the west coast to work for Pacific Gas and Electric in Portland, Oregon until retirement in 1985. He was an avid supporter of his community through his involvement in the PTA, local swim team, and Boy Scouts of America. He also spent many volunteer hours in support of the Tillamook Water Department, local historical and genealogical societies, and the Republican Party walking precincts. He was an accomplished and passionate genealogist. Bob and Lorry established the Tillamook Family History Center in about 1980. Bob is preceded in death by his wife, Lorry, and daughter, Judy Elizabeth, his two younger brothers, Ralph Jr. and James Reid, two sons-in-law, Dennis Longman and David Ward, and three grandchildren Haley and Shaney Longman and Aaron Reid. Bob is survived by his daughters Karen (Earl) Plunkett, Kimberly (Tom) Lampson, Georgene (Kirt) Bare, Susan Ward, his son Jeffery (Lea) Reid, their spouses 35 grandchildren, 99 great-grandchildren, and 12 great-great-grandchildren. It is recommended that those who wish to make a contribution in his memory, in lieu of flowers, may do so to a charity of their own choice. The family of Bob Reid wish to extend our sincere thanks to the many friends of Bob from work, volunteer organizations, and Hawthorne Court Retirement Center for their love and support.

The family of Robert Reid created this Life Tributes page to make it easy to share your memories.