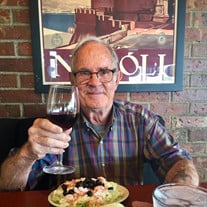 Robert Leslie Hackwith, age 86, passed away May 5th, 2020 in Sunnyside, Wa. He was born to Herman L. and Gertrude E. (Drinkwalter) Hackwith on November 3, 1933 in Fort Monroe, Virginia. Moving to the Tri-City area around 1945, the family first settled in Richland and then Kennewick. After attending Kennewick High School, Bob enlisted in the Air Force. One of his assignments based him in Alaska. Returning to the Tri-Cities in 1955, he attended CBC where he met a pretty red head. Robert and Carole L. Grigg were married June 8, 1956. They settled in Pasco where they raised their children. With a lot of hard work and love, they bought and renovated a historic Pasco house that they called home. Bob worked for the City of Pasco, Clarence Grigg Engineering and A. D. Stanley before opening his own business, R. L. Hackwith Surveying. His business included his son and sometimes a daughter or two. He surveyed in Washington, Oregon and Idaho. The family spent many summers in their camper following the Pasco Swim Team schedule with the kids. The Oregon Coast was always a favorite destination, especially when family friends, the Miller's joined them. Bob was very active. He loved bowling, hiking, biking, swimming, square dancing and canoeing. He liked to go mountain climbing and hunting deer or elk with his son, Guy. He was a faithful member of the Pasco First Lutheran Church. He loved to sing in the choir and spent many years volunteering his skills maintaining the church property. Bob is preceded in death by his parents, his wife Carole, sisters, Judith Johnson, Mary Jane Houtrouw, brothers, Lawrence and John. He is survived by his sister, Nancy Maxson, daughters, Terri Carpenter (Ross) of Pasco, Robin Cooley (Lester) of Snohomish, Piper Mitchell (Michael) of Pasco, Kelly Hackwith of Mt. Hood and son, Guy. He is also survived by grandchildren, Courtney, Tyler, Lauren, Ashley, Riley, Amanda, Katie, Samantha and Carissa plus 11 great-grandchildren. A private burial will be in Kennewick at Desert Lawn Memorial Park. A celebration of his life will be held at a future date. In lieu of flowers, please consider donating to the Franklin County Historical Society, ARC or Hospice Chaplaincy.

Robert Leslie Hackwith, age 86, passed away May 5th, 2020 in Sunnyside, Wa. He was born to Herman L. and Gertrude E. (Drinkwalter) Hackwith on November 3, 1933 in Fort Monroe, Virginia. Moving to the Tri-City area around 1945, the family first... View Obituary & Service Information

The family of Robert Leslie Hackwith created this Life Tributes page to make it easy to share your memories.