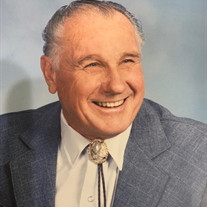 Robert (Bob) Cauble, of Kennewick, WA, passed away in his home Friday August 14, 2020, at the age of 91, after bravely battling several forms of cancer for 30 years. He is survived by his loving wife of 74 years, Janell (Cheek) Cauble; sons, Ronald G Cauble (Linda) and Robert Alan Cauble (Cindy), and daughter Debra Thomas (Nelson); sister Bernice Row and brother Donald Cauble (Jackie); grandchildren Lisa Cauble, Keri Stokes (Schon), Lezlie Bigham (Rick), Angela Dougherty (Dave), Marty Cauble (Suzanne), Jeri Roper (Geoff), and RB McCord (Teresa); and multiple great and great-great grandchildren. Robert was predeceased by his parents Arthur and Edna Cauble; son Donald J. Cauble, brother Nelson Cauble, sisters Lois Johnson, Gladys Raef, Hazel Garrett, Rachael Bluff, Edith Tillman, Anna Lee LaBar, Joyce Cauble and Sandra Malot, grandsons Robert Cleavenger and Jason Cauble, and great granddaughter Andrea Conner. Robert, not expected to live past the age of 5, was born in Walnut Grove, Missouri, the 9th of 12 children, and spent the majority of his youth in Grants Pass, OR, before moving to Richmond, CA in 1944, where he met his wife, Janell. At the age of 15, he forged his birth certificate and medical exam (due to his heart condition) and enlisted as a Merchant Seaman during WWII. In 1946 he married his lovely bride, Janell, and they moved to Kennewick, WA in 1947 where they built a large, beautiful family. Robert was a longtime member of UA Pipefitters and Steamfitters Local # 598, originally joining the union in 1946 in Richmond, CA. Robert was a very active member of the AMMV, and later became Commander of the Mid-Columbia Chapter Merchant Marines and Navy Arm Guards, when he and his wife started that chapter in 2002. Bob was instrumental in his Chapter raising the funds that built the Veterans Memorial in Columbia Park. Bob was the WA State Vice Commander of Underage Military Service Veterans and was chronicled in the book America's Youngest Warriors. Bob was also a member of the American Legion, WA State Grange, AMVETS, Veterans of Foreign Wars, The A.C.E.S, NAU, and Faces of Valor. Bob was on the Governor's Board during the planning and building of the first WA state Veteran's Cemetery at Medical Lake. He laid Wreaths Across America at that cemetery, as well as the Richland, Kennewick's, and Pasco cemetery every Veteran's Day Bob, never the shy one, made friends everywhere he went. He loved telling stories, as well as listening to other's stories, which endeared him to everyone he met. Bob was extremely sensible, funny and quick-witted, loving, and very strong willed. He taught boys how to become men, left this world a better place, and left everyone he met a better person. Bob and Janell attended the Kennewick Church of the Nazarene. Private services will be held.

Robert (Bob) Cauble, of Kennewick, WA, passed away in his home Friday August 14, 2020, at the age of 91, after bravely battling several forms of cancer for 30 years. He is survived by his loving wife of 74 years, Janell (Cheek) Cauble; sons,... View Obituary & Service Information

The family of Robert E Cauble created this Life Tributes page to make it easy to share your memories.

Robert (Bob) Cauble, of Kennewick, WA, passed away in his home...