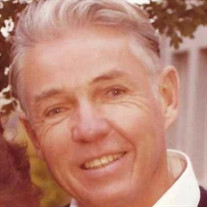 Robert C. Brown November 25, 1921- October 20, 2020 Our beloved father and grandfather, Robert C. Brown (Bob), passed away peacefully at home on October 20, 2020. He was five weeks shy of his 99th birthday. Bob was an exceedingly kind, honest, lighthearted, and intelligent man with an exceptional wit and sparkling sense of humor. He brought cheer and goodwill to others every day. He was loved by so many who knew him, and he will be greatly missed. Bob was born November 25, 1921 in Des Moines, Iowa, the third child of Frank G. Brown and Bernice Childress. Bob had an extremely close relationship with his two older siblings, Jack and Lola. He often referred to Jack as his very best friend. The Brown family first lived in Michigan where their father Frank worked for Sears. At the age of seven, Bob's father took a job as a Sears store manager and moved the family to Ogden, Utah. Bob graduated from the University of Utah in 1943 with a degree in Business Administration. Bob finished college before being called to serve in WWII. In 1944, he attended Artillery School in Quantico, Virginia, where he trained for twelve weeks. After Quantico, he joined the 4th Division of the Marines and was sent to Camp Pendleton in California. He was later shipped to Maui, Hawaii to await his next orders. In 1945, Bob was shipped to Guam and then to Iwo Jima. He landed on Iwo Jima with the 4th and 5th Divisions, two of the very first on the island. The Americans were surprised to find the enemy waiting and ready for them. Many lives were taken when the Marines stormed the beaches of Iwo Jima. As a Frontline Observer, Bob's job was to maneuver ahead of the troops. He found himself quickly in charge of his group when his sergeant was killed. Bob became a 2nd Lieutenant before being discharged from the military; he was later honorably awarded the rank of captain in 1958. Bob promised himself if he ever made it out of Iwo Jima alive, he would never complain again. Bob returned to realize a successful 32-year career with Sears Roebuck and Company, which began in Logan, Utah. In the early 1950's, Bob accepted a position with Sears in Tacoma, Washington, where he met Patricia Gregory on a blind date. Bob and Patricia were married in April 1953. They had a wonderful life together raising three loving children, Greg Brown, Jerry Brown and Nancy Odegard (Brown). In 1964, Bob was promoted to Merchandise Manager, and the Brown family moved to Portland, Oregon. In 1967, the Brown family moved to Walla Walla, Washington, where Bob was promoted to Sears store manager. In 1970 Bob transferred to the Tri-Cities, accepting a position as Sears store manager in Pasco, Washington. Bob retired from Sears in December of 1978. He later enjoyed dabbling with selling real estate and tutoring students at Columbia Basin College. Bob's beloved wife Patricia passed away in 1990. He later married Betty Rounds in January 1993. Bob and Betty had a wonderful life together, playing golf, traveling and visiting family. Betty passed away in 2008. Bob was a big sports fan and rooted avidly for the Cougars, Huskies, Mariners, and Seahawks. However, he would often get too nervous to watch the entire game if it became too close. Bob's favorite sport was golf, which he began playing as a youth. As a freshman in 1940, he was the Arizona State Teachers College (now known as Arizona State University) golf champion. The Brown family joined the Tri-City Country Club when they moved to Kennewick in 1970. Bob remained a member for as long as he could still play golf, which was well after he turned 90 years of age. He played in many golf tournaments in the Tri-Cities throughout the years. He especially enjoyed the partner events, which he played with his first wife Patricia, and later with his second wife Betty. Bob also enjoyed watching and occasionally attending the major golf championships with his two sons Jerry and Greg, who he taught to play golf at a very early age. Bob was fortunate to make many new friends later in life, in part through his frequent visits to Starbucks in Kennewick. He loved his "group meetings" and frequently commented on how lucky he was to have met so many wonderful people there. He was jokingly appointed the "Chairman" of the group. A big thank you to all his Starbucks friends! Bob was the antithesis of a "grumpy old man." He maintained his prodigious sense of humor throughout his life, even improving it with his self-deprecating humor on the frustrations of the aging process. Bob lived a long and fulfilling life. Above everything, his biggest joy was his family. His relationships with his children and granddaughters meant the most to him. From the very beginning of his married life, his priority was always to support and enjoy the close bonds of his family. Bob is survived by his three children, Greg Brown (Pasco), Jerry Brown (Bellevue), and Nancy Brown Odegard (Mercer Island). He is also survived by his son-in-law, John Odegard (Mercer Island), and his two granddaughters, Alexi and Tatum Odegard. His family and friends will miss him more than words can possibly express. A celebration of Bob Brown's life will be held in the late spring/summer of 2021 when a gathering can take place safely. The family requests that any donations be made to the Chaplaincy Hospice House, 2108 W. Entiat Ave., Kennewick, WA 99336. Rest in Peace, Love, and Strength Dad

The family of Robert C Brown created this Life Tributes page to make it easy to share your memories.