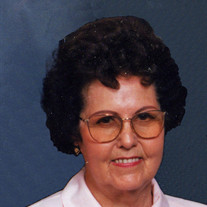 Ritta Withers passed away at home on March 17, 2022. She was born to James Timbrel and Eulalia Jensen Worlton on August 13, 1932 in Salem (Rexburg), Idaho. She was the fifth in a family of five children. She was her Dad's "right hand man" on the farm and enjoyed ice skating in the winter and swimming in the summer. She graduated from Sugar Salem High School and was Student Body Secretary her senior year. In 1950 she married her high school sweetheart, Lee J. Withers, in the Logan, Utah, Temple. They have three children: Jerry (Lauri) Withers, Kristy (Steve) Gamble, and Dayle (Lisa) Withers. They spent the years their children were growing up in Idaho Falls and she worked part-time at Utah-Idaho Sugar Factory, where Lee also worked. They moved to Garland, Utah for a short time before moving to Kennewick, Washington when the sugar mills closed. They worked together to build several homes. Family was very important to her - she enjoyed family vacations pulling a trailer all around the western states from Canada to Mexico. The family built a cabin in Island Park, Idaho and had fun playing games, fishing, riding snowmobiles and three-wheelers. She also enjoyed taking their fifth-wheel trailer to the Oregon coast and they spent several winters as snow-birds. She was active in the Church of Jesus Christ of Latter-Day Saints and held many callings, but really liked working in both the Seattle and Columbia River Temples. She was talented and creative - doing many kinds of handwork and oil painting and she liked Hummels, crystal, and other collectibles. They have been married for 71 years. Ritta was preceded in death by her parents and siblings. She is survived by her husband, Lee, her children, seven grandchildren, and 15 great-grandchildren. The family will receive visitors at Mueller's Tri-Cities Funeral Home, 1401 S Union in Kennewick, WA on March 23, from 6:30 to 8:00 p.m. and a Celebration of her Life will be held at Flamm Funeral Home, 61 N 1st E, Rexburg, ID on March 25, with visitation at 10:30 and service at 11:00 a.m.

Ritta Withers passed away at home on March 17, 2022. She was born to James Timbrel and Eulalia Jensen Worlton on August 13, 1932 in Salem (Rexburg), Idaho. She was the fifth in a family of five children. She was her Dad's "right hand man" on... View Obituary & Service Information

The family of Ritta F Withers created this Life Tributes page to make it easy to share your memories.