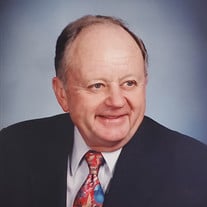 Richard (Dick) Que Quigley, 92, passed on December 19th, 2021. He was born in Boulder, Colorado on February 7th, 1929 to Charles and Geneva Quigley. His younger sister, Charlene, joined the family in 1931. In 1943, Charles moved the family out to Richland, Washington to work on the Hanford project. Richard attended Columbia High School in Richland from 1943 to 1947. He was involved in various social clubs, worked on the "Columbian" yearbook, and became a part of the CHS Cheer Team; an activity that continued into his college years. His high school friends knew him mostly as "Quig," a nickname that stayed with him for the rest of his life. Richard was always busy and spent his summer breaks working back in his beloved Colorado. As a teen, he hitchhiked across the west to return there, working on a dude ranch, herding sheep, and even spent a summer working at Yellowstone National Park. Once Richard graduated from high school in 1947, he attended college at Eastern Washington State College (Eastern Washington University) in Cheney, Washington, graduating with a Bachelor's degree in education. In 1951, Richard joined the United States Coast Guard and served aboard the cutter Northwind, an ice breaker. They spent months keeping shipping lanes open in the Bering Sea and then traveled south through the Panama Canal and up the US Eastern Seaboard. After completing active service, he joined the Coast Guard Reserves and remained in the Reserves until 1965. Following active duty, he taught sixth grade in Milwaukie, Oregon and Moses Lake, Washington, leaving to study law only after working to unionize the teaching staff. Richard attended Willamette University Law School in Salem, Oregon, from 1955- 1957 and was president of the Phi Delta Phi Law Fraternity and an officer of the Student Bar Association. While in his final year of law school, he met Joyce Ohlsen, a young high school teacher working in Salem. After a whirlwind romance, they married in Portland, Oregon in 1957 and remained in Salem for his final year of law school. The couple moved back to Richland in 1958, where Richard opened his first law practice. Their eldest son Mark was born in 1959, followed by Colleen in 1961 and Susan in 1964. The family moved to Kennewick in 1965 and built their dream home there in 1974. Richard and Joyce lived in that house until the fall of 2021, allowing them to celebrate their 64th year of marriage at their home. From 1965 to 1981, Richard was chief counsel for Washington Public Power Supply System (W.P.P.S.S.). During his time at WPPSS, Richard appeared before the United States Supreme Court, the Nuclear Regulatory Commission, and testified before Congress during the W.P.P.S.S. loan default. He was also interviewed by 60 Minutes host, Mike Wallace for a 1983 story about W.P.P.S.S. Throughout a life of civic involvement, Richard served as Benton County's first public defender, ran for City Council and Benton County District Court Judge. He was also active in the Democratic Party of Washington and was a long-time member of the Pasco - Kennewick Rotary Club. A licensed attorney for over 64 years as a member of both the Washington and Oregon State Bar Associations, Richard joined the law firm of Westland, Leibler, Ivey and Larsen in 1981 and "officially" retired in 2000. Retirement did not slow Richard down at all, and he continued to practice law part-time, golf, and travel with his wife Joyce, most often to Hawaii, but also up and down the West Coast. He particularly loved heading to the Oregon Coast each winter to "storm watch", walk on the beach, and make Cioppino. Richard also loved the warmer climes and convinced Joyce to travel to Mexico with him a few times. Always social, Richard was a founding member of "Club 40" a Columbia (now Richland) High School Alumni group that held annual reunions for all RHS Alumni of the 1940s and as an avid sailor, Richard joined the Columbia Basin Sailing Club, where he sailed his Catalina 22' sailboat, the "Quig Pro Quo II." Richard participated in sailing races, "just for fun" around local waterways, and even the San Juan Islands. Joyce and Richard have been members of First Lutheran Church in Kennewick for over 52 years, and his memorial service will take place there on Friday, January 7th at 2pm. A private burial will take place earlier in the day at Desert Lawn Memorial Park in Kennewick. Mueller's Tri-Cities Funeral Home will be coordinating all services. Richard is survived by his wife, Joyce, Mark Quigley (Valerie Petrie), Colleen Casey (Bill Casey), Sue Quigley (Heather Hebard) and grandchildren Elizabeth Casey, Grace Quigley, and Willem Quigley. He joins his granddaughter, Michelle Casey, in heaven's light. In lieu of flowers, memorial donations may be made to Benton Franklin Humane Society or Tri City Chaplaincy - Hospice House. https://chaplaincyhealthcare.org.

Richard (Dick) Que Quigley, 92, passed on December 19th, 2021. He was born in Boulder, Colorado on February 7th, 1929 to Charles and Geneva Quigley. His younger sister, Charlene, joined the family in 1931. In 1943, Charles moved the family... View Obituary & Service Information

The family of Richard Que Quigley created this Life Tributes page to make it easy to share your memories.