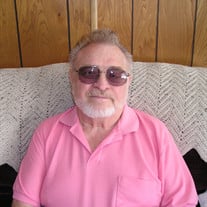 Richard Earl Meyer, 81, beloved husband, dad, brother, grandpa, and great-grandpa of Kennewick, went home to his Savior, Jesus Christ on Wednesday, September 15th. Richard was born in Bonners Ferry, Idaho to Val and Sarah Meyer on March 21, 1940. Richard married Donna (Cole) Meyer on April 15th, 1961 in Richland, Washington. I think this was when I began to get an idea of my dad's sense of humor, getting married on Tax return day, REALLY? Maybe it was because he would never forget their anniversary. Together they had 3 children; Vonnie, Robin and Richard Jr. They celebrated 60 years of marriage this year. Papa loved fishing and hunting, especially with the Webb family, and had taught every grandchild how to fish and hunt. He looked forward to his family reunion every year held on Labor Day weekend, a tradition since 1976. Our family was an extended family, but his love for every one of them was immense. Papa was a hard working man, a cement mason for 49 years. His career in construction required many moves to many different states. One thing was certain, wherever Richard went to work, his brother Raymond was always there with him. Richard and his brother, Raymond, share a unique family tie, their wives are sisters (Donna and Deloris). These two "families" grew up together as one big family, sharing many memories over the years. Papa decided to settle in Kennewick, and together with his brothers, they owned and operated Cascade Construction. Papa was truly an amazing man and will be missed by many. I will miss him for many things, especially receiving his birthday card every year, it not only had how old I was in years, he always calculated the number of days, hours, minutes and even seconds that I was too! So when papa turned 80 last year, his invitations included his age in years, days, hours, minutes and even seconds! Gotcha papa!!! Papa had special sayings for all of his grandkids that will never be forgotten; you're it, 10-4 over and out, #1 daughter, #1 granddaughter, See ya later alligator, and GOZINTA! We will all miss his stories and his jokes, he had hundreds of them and remembered them all, which was amazing. He will be missed by all who had the privilege of knowing him. He is at peace now, hugging and shaking hands with his Heavenly family once again. Richard was preceded in death by his parents, Val and Sarah; his brothers, Herb, Leonard, and George; his sisters, Leona Richardson, Juanita Fisher, and Barbara Jean Meyer. Surviving; his is his loving wife, Donna; daughters, Vonnie (Jack Nolan) and Robin (Brian Hudson); son, Richard Jr.; grandson, Garon Smith; granddaughter, Tristan (Wade) Youngs; granddaughter, LaRae Hudson; great-grandsons, Christian Pence, Neahmyah Julson; great-granddaughters, KayDance and Seraphym Smith; Brother, Raymond (Deloris) Meyer; sister, JoAnne Holloway and numerous nieces and nephews. A special word of thanks to niece, Brenda Tole, for her unending love and giving heart to her Uncle Rich and Aunt Donna, we are forever grateful. The family would also like to say thank you to Kevin and Dr. J for their support during Papa's illness. Graveside services will be officiated by Pastor Gerald Ward on Saturday, September 25th at 10:00 am at Desert Lawn Memorial Park located at 10th and Union Street in Kennewick. A celebration of life will follow at Kennewick Eagles located at Canal Drive and Fruitland Street in Kennewick.

The family of Richard E Meyer created this Life Tributes page to make it easy to share your memories.