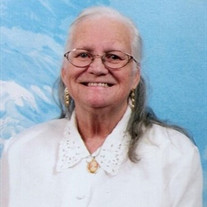 On March 31, 2020, Reva Mae Hyslop went to Heaven to join her husband David L. Hyslop (1940-2006) and her granddaughter, J'nisa C. Fox (2002-2018). Reva M. Remington was born in Tulsa Oklahoma on November 8th 1935. Her mother Viola A. Hudson and family moved to Washington in the early 40's. Reva lived most of her young life in Yakima Washington except when she was away at the School for the Deaf in Vancouver Washington. Reva had three daughters, Doris Mae Burnley in 1955, Opal Kaye Hyslop 1969, and Ruthie Ann Hyslop 1973. Reva and her husband David Hyslop were married in 1968. They were family people and spent a lot of time with both of their families, as they each came from families of eight and nine children. Coincidently, they were both the oldest child in their family, and both had lost a sister at a very young age. Throughout the years Reva was active in Deaf and Hard of Hearing groups in Yakima and Tri-cities. In 1999, Reva and David moved to Richland and found happiness at their home located on the same property as her daughter Ruthie. Reva enjoyed spending time in her yard and garden with her flowers and little dog, Taco that her granddaughter, J'nisa gifted her. When not spending time enjoying the outdoors, Reva enjoyed sewing, quilting, and jigsaw puzzles. Reva also enjoyed attending services at many different churches and praising God. She appreciated the many women like Hope, Jean, Julia and Kristina that came and shared the word of Jesus and prayed with her. Many people who knew Reva would say she was a huge fan of Christmas. She would put up over 20 miniature lighted houses, shops, schools, churches, and even an ice rink with little figurine skaters, every year the day after thanksgiving. And, all people who knew her said, "she was the sweetest lady they ever met." Reva was loved by many because her heart was pure and her love overflowed, mind you she could also make some noise and let you know when you needed to know. She will be missed dearly. Reva is survived by her three loving daughters Doris Cavanaugh married to Bob, Opal Pickard married to Tonya and Ruthie Hyslop with life partner Herbie. Her grandchildren Alicia Arcia-Jimenez married to Eddie. Timothy Pickard, Erik Pickard married to Kiki, and Johnika Fox. Her two great-grandson twins, Freddy and Carlos, and great granddaughter Emma, her youngest sister Vi Roosevelt, Skye Schilling with son Brandon Franks and Terry Donscheski whom she considered family, her sister-in-law Penny Holmes, and Brother-in -law George Hyslop. And many many nieces and nephews. Also, proceeded in death by her mother and father and 6 siblings. Donations can be made to any Center for the Deaf and Hard of Hearing. Memorial services will be announced when safe to gather.

The family of Reva Mae Hyslop created this Life Tributes page to make it easy to share your memories.