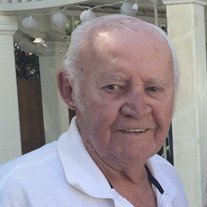 PATRICK NASH, 86, was born in Camas, Washington, the second of four boys born to Jim and Bertha Nash on July 17, 1935 and passed away peacefully with his children at his side on November 20, 2021. While growing up, Pat's family moved many times following available work until they landed in Kennewick. Pat served in the Navy from 1953 until his honorable discharge in 1961. While in the service, he became a master electrician. Upon his discharge, he returned to Kennewick and joined his father working as an electrician at Boise Cascade for more than 39 years before retiring. Soon after meeting Arlene "Lea," they married in 1960 and settled in Kennewick where they raised their family, living in the same home for the rest of their lives. Pat had numerous interests and enjoyed many hobbies in his lifetime including camping, fishing, hunting, motorcycle racing, trap shooting, bowling (setting the pins by hand was his first job), golfing and traveling to New Mexico to see his grandkids. His favorite pastime in his later years was collecting records, amassing over 5,000 albums. He spent countless hours listening to music while making CDs for friends and family. He was a member of the Eagles Lodge 2485 where he volunteered many selfless hours over the years and he generously supported many of their charities and other Arie needs. Pat is preceded in death by his parents, Jim and Bertha Nash; his wife, Lea Nash; daughter, Becky Nash; and brothers, Jerry, Berle and David Nash. He is survived by his son, Don Nash (Jo) of Las Cruces, New Mexico; daughters, Renee Nash and Tracy Watts (Jim) of Kennewick; eight grandchildren and nine great-grandchildren. A graveside service with military honors will be held at 11:00 a.m., Saturday July 16, 2022 at Desert Lawn Memorial Park on 10th and Union St. in Kennewick. A Celebration of Life will be following the service at the Eagles Lodge 2485 on Canal Drive and Fruitland Ave. in Kennewick. Pat was a great friend and role model; he was gracious and kind to everyone. He never met a stranger, only new friends. Our family will love and miss him forever. Thanks for being our Dad.

PATRICK NASH, 86, was born in Camas, Washington, the second of four boys born to Jim and Bertha Nash on July 17, 1935 and passed away peacefully with his children at his side on November 20, 2021. While growing up, Pat's family moved many times... View Obituary & Service Information

The family of Patrick Asa Nash created this Life Tributes page to make it easy to share your memories.

PATRICK NASH, 86, was born in Camas, Washington, the second of...