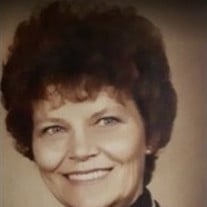 Umatilla, Oregon - Patricia Ann Patton Nafarrate was born October 4, 1938 in Eugene, Or. to Kenny and Ellen Jean Fox. She died Thursday, April 7, 2022 at Guardian Angel in Hermiston, Or. She graduated in 1956 from Myrtle Creek High School in Myrtle Creek, Or. She met and married John D. Patton not long after graduating. They had two boys, Jeff and Joe Patton. She worked as a bookkeeper for 12 years for a logging/cattle company in Central Oregon. In 1977, she moved to La Grande, Or. where she went to Business College. After completing the course, she moved to Klamath Falls, Oregon to work for a credit union. This is where she met Paulino Nafarrate and later married. They then moved to Kennewick, Wa. They lived there for two years, then moved to Umatilla, Or. where she worked for many years for the United States Fish and Game, counting fish runs at the McNary Dam until she retired. Patti is survived by her husband, Paulino Nafarrate; Brothers, Bill and Sandy Fox of Portland, Or., Larry and Debbie Fox of Kennewick, Wa., Mark and Jana Fox of Finley, Wa.; Sons, Jeff and Denise Patton of Lenore, Id.; Joe and Candice Patton of Baker City, Or.; Grandchildren, Josh and Cris Patton of Pasco, Wa., John Patton and Jennifer Summerhill of Helendale, Ca., Justin and Stormy Patton of Lewiston, Id., Jerad Patton and Kristine Stehle of Burns, Or., Jessica and Chico Macias of Salem, Or.; and eight great-granchildren. She was preceded in death by her Dad, Kenneth Fox; Mom, Ellen Jean Fox; Brother, Dick Fox; and grandson, Joe Patton, Jr. Rosary and viewing will be from 4 to 8 p.m., Thursday, April 21 at Mueller's Funeral Home. Service is the following day, Friday, April 22, 11 a.m. at Mueller's Funeral Home, 1401 S. Union St., Kennewick, Wa. Patty had a love for animals. So in lieu of flowers, she would love to have donations sent to the Human Society in Hermiston, Oregon.

Umatilla, Oregon - Patricia Ann Patton Nafarrate was born October 4, 1938 in Eugene, Or. to Kenny and Ellen Jean Fox. She died Thursday, April 7, 2022 at Guardian Angel in Hermiston, Or. She graduated in 1956 from Myrtle Creek High School in... View Obituary & Service Information

The family of Patricia Ann Patton Nafarrate created this Life Tributes page to make it easy to share your memories.