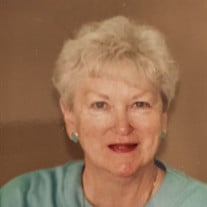 Patricia Hannah Campbell (Pat) passed away Sunday, May 16th in Kennewick. She was born April 13, 1928 in Seattle, Washington to Edward and Hannah Kabrick. Pat spent most of her childhood in both Spokane, Washington and Missoula, Montana. She graduated high school from Loyola Sacred Heart Academy and attended the University of Montana. She was a member of the Delta Gamma Sorority and remained a "Griz" supporter throughout her life. While in college, she met fellow student Donald Campbell, whom she later married and spent 61 years together until Don's passing in 2011. Pat and Don spent their early married life in Libby, Montana where Don served as the head football coach and high school history teacher. In 1959, Don accepted a new position at Kennewick High School and moved the family to the Tri-Cities. Missing the mountains and trees of Montana, he thought "they'd give this place one year." They never left and spent the next 62 years raising a family here. Pat has been a member of Saint Joseph's Catholic Church in Kennewick since arriving in the Tri-Cities, where she was earlier a member of the choir and altar society. In addition to her most important career as a loving mother to five children, Pat worked as a medical records specialist for Our Lady of Lourdes Hospital, as well as several other medical practices in the Tri-Cities. She later worked as an on-site administrative support specialist for the Federal Emergency Management Agency (FEMA), where her office was often a tent at a post disaster site in the United States or one of its territories. The FEMA work proved to be some of the most challenging, however, also most rewarding accomplishments of her career. Pat provided the gift of a great life to, and is survived by, her sons Duncan (Patricia) of Pasco; Douglas (Diane) of Kennewick; daughters Beth Anne Fowler (Woodrow) of Stevensville, Montana; Kerry Finley (Jim) of Eureka, Montana; Kristin Heflick (Scott) of Yakima, Washington. She is also survived by nine grandchildren; eight great-grandchildren; and life-long friend Geneva Greager. Pat was preceded in death by her parents, husband Donald, sister Barbara Pizzini, and grandson Colin Campbell. Per Pat's request, a small private family Catholic mass and burial service will be held as her final interment. Thank you to her supportive staff and friendships at; Fieldstone Grandridge Assisted Living; Brookdale Canyon Lakes Assisted Living; and Tri-City Chaplaincy Health Care for your care provided to Pat, and the support for her family during the last several years. If desired, a donation in her name may be made to Tri-City Chaplaincy Health Care, 1480 Fowler Street, Richland, WA. 99352. The family invites you to sign their online guestbook at www.muellersfuneralhomes.com.

Patricia Hannah Campbell (Pat) passed away Sunday, May 16th in Kennewick. She was born April 13, 1928 in Seattle, Washington to Edward and Hannah Kabrick. Pat spent most of her childhood in both Spokane, Washington and Missoula, Montana.... View Obituary & Service Information

The family of Patricia Hannah Campbell created this Life Tributes page to make it easy to share your memories.

Patricia Hannah Campbell (Pat) passed away Sunday, May 16th in...