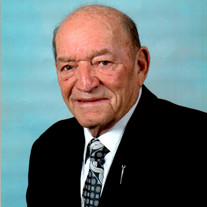 90 years old 1929 - 2020 Pat Sanders was born in Tulia TX to Baker Olaf and Cora Berry Sanders. He was number 8 out of 10 kids, the only one born in a hospital and the only one with no middle name. His parents were from Alabama and the family... View Obituary & Service Information

The family of Pat Sanders created this Life Tributes page to make it easy to share your memories.