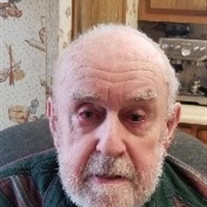 Oscar Julius Elgert was born on February 8, 1919 in a small village in Poland to Wilhelm and Pauline (Radtke) Elgert. He died peacefully at home surrounded by his loving children in Kennewick, WA on December 7, 2019 at the age of 100. His father was killed in Poland fighting against the invading German army when Oscar was 6 years old. After his father's death, his mother emigrated, together with his three sisters, to America through Ellis Island in 1926. Oscar's family finally made their way to Seattle, WA where he spent most of his younger years. Oscar loved to fish in Puget Sound and caught many salmon and sold chicken eggs to make a little pocket change. Oscar graduated from Richmond Beach High School in 1938 and the University of Washington in 1950 with a Bachelor of Science degree in chemical engineering. Oscar joined the U.S. Army Air Forces in 1945 and became a fighter pilot. Oscar flew missions in Panama. After serving his time in the Air Force he continued with his Master's Degree in Nuclear Engineering. While living in California he met his wife Sybil Josephine Day, who was serving in the U.S. Women's Army Axillary Corps. Oscar and Sybil were married on base at Park's Air Force Base on July 3, 1952. Oscar's career in the early days of nuclear engineering, afforded him travel to many places including Japan, Idaho, Italy, Missouri, California, Pennsylvania. The Elgert family moved to Benton City, WA in 1966 and then Kennewick, WA in 1974. Oscar began working for the Atomic Energy Commission and eventually became the Deputy Director for the Department of Energy, Hanford Operations. Oscar loved to fish, hunt, rock hound and boat in the Columbia Basin with his family while living there for 53 years. Oscar loved his family and many happy memories were made fishing and boating on the Columbia River. Oscar even ventured in the area of commercial salmon fishing in Ocean Shores, WA. He was a master bridge player and joined in a bridge group for fun and entertainment. Oscar retired from the government position in Hanford in 1985 but continued to work as a consultant until the age of 82. Oscar loved the Lord and served his church and community throughout his life. He was a Gideon member from 1990 until his death. Oscar was preceded in death by his wife Sybil J. Elgert, mother and father Wilhelm and Pauline Elgert, sisters Erika (Wally) Kamprath, Eleonore (Dick) Gepner and Melita (Tom) Messer. Oscar is survived by his children, including Phillip (Sharon) Elgert, Sybil (Joe) Kidder, Stephen Elgert, Eric Elgert. Four grandchildren, including Karlon (Desiree) Kidder, Kylene (Aaron Thompson) Kidder, Jimmy Elgert, Sheila Elgert, Carla (Bill) Gowey and nine great grandchildren; Shayla Elgert, Evan Elgert, Jaime Thompson, Alyssa, Natalie and Vanessa Tobon, and Jacob, Joshua and Josiah Sanders.

Oscar Julius Elgert was born on February 8, 1919 in a small village in Poland to Wilhelm and Pauline (Radtke) Elgert. He died peacefully at home surrounded by his loving children in Kennewick, WA on December 7, 2019 at the age of 100. His father... View Obituary & Service Information

The family of Oscar Elgert created this Life Tributes page to make it easy to share your memories.

Oscar Julius Elgert was born on February 8, 1919 in a small village...