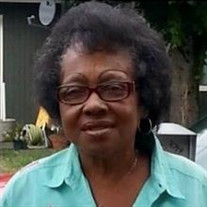 Ola Mae (Causey) Keyes, age 70, passed away peacefully on Sunday, May 10, 2020, at Providence Portland Medical Center in Portland, Oregon. Ola was born September 11, 1949, in Tangipahoa, Louisiana, to Elise (Muse) Dickerson and Elzy Causey. She was the eldest of six children. At a young age, Ola moved to California with her mother, and then they relocated to the Tri-Cities area during the 1950s. While growing up in Pasco, Washington, she helped her mother and step-father (Booker T. Miles) with various household duties such as taking care of her five younger siblings. Ola truly admired her mother’s passion and dedication toward family, and she adopted several characteristics, including independence, resilience, and a spiritual mindset. She also attended Pasco High School and Columbia Basin College. In 1975, as a single mother, Ola and her three children (Bobby, Orlando, and Nicholle) moved to Portland, Oregon, to explore new opportunities. For more than 20 years, she worked as a Caregiver and volunteered in local public schools as a Teacher Aide. While serving the community, Ola was known as someone who supported those closest to her, regardless of their situation. In 1998, Ola resigned as a caregiver and dedicated her time and effort to taking care of her mother, who became sick. This daily process included feeding and bathing, regular doctors’ appointments, and attending weekly dialysis sessions (3) until her mother’s death in 2003. Ola would often say, “My mom wasn’t going into a nursing home.” She had a strong bond with her family and friends and enjoyed having them around for any occasion. Ola was outgoing and developed relationships with people quickly. Furthermore, she had a feisty spirit and was a fierce advocate for her grandchildren, whom she cherished dearly. Ola genuinely enjoyed mailing greeting cards and loved to cook (long gravy) for her family, especially during holidays. Some of her best dishes included fried chicken, neck bones and mustard greens, sweet potato pie, and homemade ice cream. Her ultimate mission was to make sure that relatives and friends felt welcomed and loved whenever she connected with them, which was frequent. Ola is survived by her three children, three brothers, grandchildren, great-grandchildren, and many family members and friends.

The family of Ola May Keyes created this Life Tributes page to make it easy to share your memories.