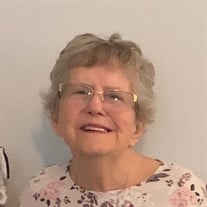 Nancy Lee Manthos of Kennewick, WA passed away from the effects of Small Cell Lung Cancer on March 8. She was 86. Nancy was born on July 8, 1933 to Hugh and Ethel Givens of Boone, Iowa. She was the fourth of 5 children. Nancy was a self-proclaimed bossy child who excelled at school in her younger years. By the time she was in high school she was bored and was more interested in swimming. She served as a lifeguard after school and was a member of the girls Aquatic Swim "Group" as girls were not allowed to race back then. The boys' coach used Nancy and another girl to race against the boy's swim team as they could beat the boys. She graduated in 1951 from Boone High School. In 1952 she met the love of her life, Eddie Manthos and were married for 62 years until his passing in 2014. They moved to Oak Ridge, Tennessee in August 1954 where Eddie worked for Union Carbide. They had two children, Jon and Nikki. Nancy was very active working with both Boy Scouts and Girl Scouts for many years. In 1974 they moved to Kennewick, Washington where Eddie worked for Westinghouse. Nancy worked many different jobs, some in health care and many in credit and collections. Her family would joke that she was an expert at everything (or so she proclaimed). She enjoyed her many years working at the Court Club as a water arthritis instructor. Her last job was with Paine Webber as an Administrative Assistant. After retirement most of her spare time was spent working on projects for her church, St. Nectarios Greek Orthodox Church in Pasco. Nancy's love and dedication for her church was her passion. She was always willing to step up and take the lead. Nancy and Eddie were very active in supporting St. John the Forerunner Greek Orthodox Monastery in Goldendale, WA. Nancy also volunteered at the Grace Clinic in Kennewick. Nancy followed her husband's lead and was very active in supporting the Richland Rod and Gun Club for many years. She loved her Labrador Retrievers, Tina and Popi, and her many grand-dogs. They were accepted as true family members. Nancy didn't know a stranger and she was a whiz at remembering names, faces, and phone numbers. She was the life of the party at her subdivision block parties where she introduced everyone to the popular Greek drink Ouzo. Surviving her is son, Jon (Kimberly) Manthos; daughter Nikki (Merrill) Saleen; Granddaughters Andrea (Tony) Manthos, Vanessa (Kyle) Whitten, and Victoria (Matt) Manthos of Pasco, WA; and four great grandchildren Peyton, Victoria, Parker, and Maxwell. Funeral services will be Friday March 13th, 3:00 pm at St. John's Orthodox Church, 244 Jackrabbit Lane, Kennewick, WA 99338 with graveside service to follow at Desert Lawn Memorial Park, 1401 South Union Street, Kennewick. While flowers are welcome, we are confident that Nancy would have encouraged you to donate to the Grace Clinic, 800 Canal Drive, Kennewick WA, 99336.

Nancy Lee Manthos of Kennewick, WA passed away from the effects of Small Cell Lung Cancer on March 8. She was 86. Nancy was born on July 8, 1933 to Hugh and Ethel Givens of Boone, Iowa. She was the fourth of 5 children. Nancy was a self-proclaimed... View Obituary & Service Information

The family of Nancy Lee Manthos created this Life Tributes page to make it easy to share your memories.

Nancy Lee Manthos of Kennewick, WA passed away from the effects...