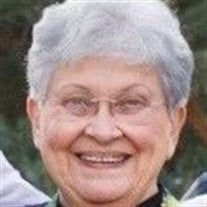 Our beloved wife, mother, grandmother and great-grandmother, age 82, of Burbank, WA passed away on January 28th, 2020. Maxine was born on December 1st, 1937 to Gilbert and Myrna Lockhart in Hancock, Iowa. She had a happy childhood growing up on the farm where she started school in a one room country schoolhouse. Later she attended high school in Hancock where she lettered in basketball all four years and was selected as an all-southwest Iowa team member. She married her childhood sweetheart, Lee Rogers on December 27th, 1958. They recently celebrated 61 years of marriage. During their marriage they moved to Florida, California, Nebraska, and Wyoming; They eventually settled in Burbank, Washington where they continued to live for the next 47 years. Maxine and Lee took several trips through Europe, Australia, Costa Rica and traveled extensively throughout the United States. Maxine graduated from business school following high school. She was an efficient office manager for several different businesses in the area, including Columbia Center Mall, Pasco Chamber of Commerce, and The Tri-Cities Visitor and Convention Bureau where she was always recognized for her positive attitude and delightful smile. After "retiring" she remained active as the office manager of the family orchard, a member of P.E.O., Burbank Heights Women's Club, several bridge groups and enjoyed her many church friends. She loved spending time and working in her yard and garden. Maxine was steadfastly dedicated to providing the best for her family, especially her many grandchildren. Maxine is predeceased by her parents. She is survived by her husband, Lee Rogers; her brothers, Dwight (Sheila) Lockhart, Dwayne (Jan) Lockhart, and Doyce (Ruth) Lockhart and nephew Zachary Lockhart; her children, Cheryl (Kurt) Clemmens, Denise (Dyanne) Kellough-Rogers, and Deanne (Joe) Rada; her grandchildren, Luke Clemmens, Hayley (Brett) Jay, Lauren (Adam) Berg, Jordan Rada and Madison Gould, Case (Carley) Rada; and great-grandchildren, Brady and Sophie Jay, Aubrey, Klay, and Miles Berg and Cade Rada; and many nieces and nephews. Services will be held Tuesday, February 4th, 2020, 10:00 a.m. at Riverview United Methodist Church, 4012 W. Court Street, Pasco, WA. Following a time of fellowship burial will be at the Wallula Cemetery, 2nd Street, Wallula, WA (about 1:00 p.m.).

Our beloved wife, mother, grandmother and great-grandmother, age 82, of Burbank, WA passed away on January 28th, 2020. Maxine was born on December 1st, 1937 to Gilbert and Myrna Lockhart in Hancock, Iowa. She had a happy childhood growing... View Obituary & Service Information

The family of Myrna Maxine Rogers created this Life Tributes page to make it easy to share your memories.