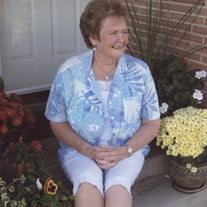 Mona Dell Swanson, surrounded by family and friends, passed on to be with Jesus on December 28, 2019. She was born in Bentonville, AR on May 15, 1941 to Paul and Kathlyn Chenoweth. She was an only child. When she was three years old her dad's job with the Oregon State Highway Department moved the family to Klamath Falls, OR, where they lived until she graduated from high school in 1959. In the fall of that year, she met Orville Swanson at an off-campus, Halloween party in Nampa, ID where both were attending Northwest Nazarene College (her an elementary education student on a singing scholarship, and him a member of the baseball team). Entrance to the party was gained by going down a slide from street level into the basement. Orville's job was to catch the entrants as they came down to make sure they did not get hurt. Mona was fine, and though we have no confirmation, we're pretty sure she told him he didn't do it quite right. Three years later, on September 1, 1962, they were married, and she gently corrected him for the next 57 1/2 years! After one year, so Mona could complete her teaching degree, the young couple moved to Kansas City, MO for four years where she was a full-time elementary school teacher while he completed his Master of Divinity at Nazarene Theological Seminary. From there it was off to their first pastorate in Dickinson, ND, where both of their children were born - Tim in 1967 and Tracey in 1970. In 1971 they followed God's call to the mission field and spent four years ministering in American and Western Samoa, both pastoring the existing Nazarene churches and planting new churches on several islands. When they returned to the states in 1974, their next church was Southwest Church of the Nazarene in Dexter, MO, where they developed many lifelong friendships. In 1981 they were called to the Kennewick Church of the Nazarene in Kennewick where they remained until her passing. Although Mona never took any of the full-time teaching jobs offered to her (preferring to be available as needed by her family or at the church), she substitute taught in basically every school district in Tri-Cities, WA, but primarily in the Finley School District. However, when the first grand kid showed up in 1998 - that was it! Teaching was over and she retired. Mona attacked grandparenting with a special gusto! Her five grandchildren - Riley (21), Hailey (20), Garrett (18), Ava (11), and Miranda (10) - all learned early on who the soft touch was for something they wanted, who would play a game, watch a movie, read a book every time, and who was always good for as many hugs and kisses as they could handle. Her children also learned quickly that they had better get the grand kids over to visit on a regular basis or their mom would show up at the front door asking if they had lost her address! Mona and Orville's love of travel is well documented as she managed to visit all 50 states, 7 Canadian provinces, and 57 different foreign countries often, with their close friends Dave and Bette McCallum or Ron and Sue Smith. Also, well know is her irritation at not quite being able to pull that cruise to Antarctica together! Mona will be remembered by all that knew her as a woman that loved Jesus, loved her family, and loved to be the life of the party. She loved to play games of any kind and her competitiveness made her the most fun kind of opponent (her son's suggested epithet of "You Will Never Beat Me" was rejected by the rest of the family as "pretty accurate" but also "probably not appropriate" for posterity). Her beautiful soprano singing voice will also be remembered by all who heard it. She traveled with a singing group representing NNC while in college on summer break and continued singing at every opportunity right up until her last days on earth. While we are terribly sad, we are not overwhelmed with grief, because we know that Mona went to heaven secure in the knowledge that her family loved her and that they were in turn confident of her love for them. We celebrate her well-lived life on earth knowing that she is alive, with Jesus, and no longer shackled by a failing body. Mona Swanson - beloved daughter, wife, mother, and grandmother - God Speed. We will all see you soon. Preceded in death by her father and mother - Paul and Kathlyn Chenoweth. Survived by her husband Orville, her son Tim (Christine), her daughter Tracey Taylor (Brad), her grandchildren Riley Taylor, Hailey Swanson, Garrett Taylor, Ava Swanson, Miranda Swanson and her sisters-in-the-lord Karen Hammer, Jewel Coverstone, and Karalee Ellis. A memorial service will be held on Saturday, January 11, at 11 am, at Kennewick Church of the Nazarene

Mona Dell Swanson, surrounded by family and friends, passed on to be with Jesus on December 28, 2019. She was born in Bentonville, AR on May 15, 1941 to Paul and Kathlyn Chenoweth. She was an only child. When she was three years old her dad's... View Obituary & Service Information

The family of Mona D Swanson created this Life Tributes page to make it easy to share your memories.

Mona Dell Swanson, surrounded by family and friends, passed on...