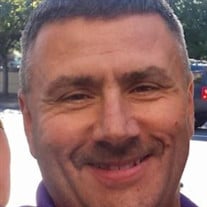 Michael (Mike) Mitchell, 61 passed away at home on May 22, 2021. He was born to Paul and Carol Mitchell on January 19, 1960 in Crescent City, CA. The family moved to Pasco, WA in 1968. Mike graduated from Pasco High School in 1978 and went to work at the Chevron Chemical Plant in Finley soon after. He still worked at the plant (now known as Nutrien) at the time of his death as a Chemical Operations Supervisor. Mike started a family in 1980 and had 4 children with his former wife, Lynnette Dodson. He later married his high school sweetheart, Piper Hackwith in 1998 and they blended their families. Mike was extremely proud of all the kids and the fine adults they have grown into. He loved baseball and played most of his life. Mike & Piper were host parents of 16 Dust Devil Players, 4 of whom are playing at the major league level. He also was an accomplished bowler & golfer. He bowled a perfect game in 2015 and he hit a hole in one in 2019, although it was on April Fools day and he had to convince everyone it was not a joke! Preceding him in death were his mother and father. Surviving Mike was his loving wife, Piper, his sister, Debbie Locati and his brother, Mark Mitchell. Mike also leaves behind his children, Kristina (Manuel) Rodriguez, Debra Mitchell, Michael (Rachel) Mitchell, Ashley Heyen, Kelly (Sara) Mitchell, Riley Mitchell and grandchildren, Tyrell, Manuel Jr, Christopher, Zara, Ava, Austin, Abbigail, Farrah, Michelle, Oliver, Elliott, Walter, Gustav, Stella, Liliana and Lorenzo. He also leaves behind many aunts, uncles, cousins and great friends. This amazing husband, father, grandfather, nephew, cousin and friend will be forever missed. A celebration of Mike’s life will be held Saturday, May 29th at 6:00PM at 5010 Meadow View Drive, Pasco. In lieu of flowers, donations can be made to the American Cancer Society or Seattle Children’s Hospital.

The family of Michael Gale Mitchell created this Life Tributes page to make it easy to share your memories.