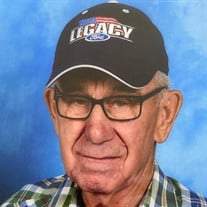 Merlin Homer Vance of Kennewick Washington passed away on Saturday March 19, 2022 at the age of 81. After a long battle with Alzheimer's disease, he passed peacefully in his sleep. Merlin was born in Aetna Alberta Canada to Lawrence Vance and Janet Jensen Vance in 1941; the 2nd of 4 children. He lived his early years on the farm in Aetna and moved with his family to Cardston in his early teen years. He went to school and finished his schooling in Cardston Alberta. He met his love, Patricia Marilyn, at the age of 17 in high school. He and Patricia married in 1963 in Calgary Alberta. They welcomed their firstborn, a son, James Alvin, September 5, 1964, and in 1965 moved from Calgary to Utah. In 1967 moved from Utah to Lacrosse Washington, and shortly after their move welcomed their second child, a daughter, Shelley Elizabeth, on September 11, 1967. In 1969 they moved to Pasco and remained in the Tri-Cities the remainder of his life, apart from 1998 to 2001 they had a short stint in the northern Idaho area. He had a very strong work ethic instilled in him at a very young age on the farm. Most of his adult life was lived with a love to farm and drive truck. Alfalfa was his passion, either growing it or hauling it. He and his wife earned their U.S. Citizenship July 7, 1978. Merlin is preceded in death by his parents, his brother LaDell Vance, sister Ronda Wigington; favorite dogs Butch and Runt. He is survived by his wife Patricia Marilyn; son James Alvin; daughter Shelley Lilly; favorite sister Sandy Brown, 5 grandchildren and 12 great-grandchildren. He was a lifetime member of the Church of Jesus Christ of Latter Day Saints and held many callings. In memory of our husband, father, grandfather…. The sound of your laughter, look of your smile Joy of your playfulness, tokens to file Memories collected, and cherish we will Not the same as in person, our heart be still Please stand tall, the fog now cleared Our love for you, strong and dear The chains of Alzheimer's, we yearned release But failed to understand, we inherited such grief This place with us you once fulfilled Forever a void, how is this real Uniquely you, never replaced Memories fond, forever cased Another gift you granted us…. your strength, your love, humor and grit We grasp with all our strength intact to heal, to love, and to admit Your time and blood you shared with us, cherish, laud, and will remain It's not goodbye, it's not the end, we'll see you soon and without pain. Funeral services through Mueller's Tri-Cities Funeral Home will be held Friday, March 25, 2022 at 12:30 PM at the Church of Jesus Christ of Latter-day Saints Parley Building.

Merlin Homer Vance of Kennewick Washington passed away on Saturday March 19, 2022 at the age of 81. After a long battle with Alzheimer's disease, he passed peacefully in his sleep. Merlin was born in Aetna Alberta Canada to Lawrence Vance... View Obituary & Service Information

The family of Merlin Homer Vance created this Life Tributes page to make it easy to share your memories.

Merlin Homer Vance of Kennewick Washington passed away on Saturday...