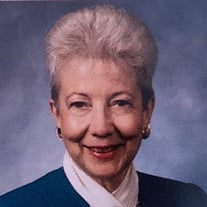 Sue Olson, 97, a long-time Tri-Cities resident, passed away peacefully on November 27, 2018 surrounded by her loving family. Born on March 12, 1921, in Claude, Texas, Mary Sue was the daughter of Charles Walker and Lyda Hathorn. She grew up with two brothers (Phil and Cal Walker) in a humble farmhouse on a dryland wheat and cattle farm in the Texas Panhandle. She was a proud Texan. Sue was a member of Alpha Lambda Delta honor sorority at Texas Women’s University and also attended Amarillo Junior College and the University of Texas where she studied business administration. She shared a story of her accounting professor bringing a transistor radio for the class to hear President Roosevelt’s speech when the United States entered World War II. Sue began working for the US Army Corps of Engineers as a clerk typist transferring from Amarillo to Tyler, Texas, and in July 1943, to the Manhattan Project in Oak Ridge, Tennessee. In Oak Ridge, she met a tall handsome chemist from northern Wisconsin, Bob Olson, who swept her off her feet with his dry sense of humor and charm. Sue and Bob were married at the Chapel on the Hill in Oak Ridge on August 22, 1944. Shortly after their wedding, Bob surprised Sue with a transfer to the Hanford Site. She was not excited about the move as a friend already at Hanford had sent a teletype saying “Don’t come here! It’s rattlesnakes, sagebrush and dust storms!” Nevertheless, the newlyweds made the drive from Tennessee to Washington using rationed gas coupons from friends and relatives. They arrived in Richland on October 2, 1944. Bob promised Sue that the move was for a six-month assignment to stand-up the plant. Like many of us, Sue came to love the Tri-Cities. Married life began in a 1-bedroom prefab. There was no mail service, only one grocery store, and no phone for months. Many of their friends had also transferred with DuPont to Hanford and they entertained in their tiny prefab with Saturday night songfests. They enjoyed downhill snow skiing at many resorts and were proud owners of original Head skis. Summer weekends found them camping and fishing. Never shy of an engineering challenge, Bob and a friend built a 20-foot cabin cruiser from a Bay City, Michigan boat kit. The Mobson was launched in May 1953, marking the start of many summer weekends enjoyed on the Columbia River and with the Richland Yacht Club. A long-awaited baby daughter, Janet, joined the fun the following year, and the family moved into a government-owned alphabet “Q” house where Sue would reside for 60 years. Sue worked as an executive secretary in the Hanford area during her early years in the Tri-Cities. It was an era when the work was classified and secret. After Janet’s birth, she “retired” and was active in community activities volunteering for the Kadlec Hospital Auxiliary, the Orthopedic Guild, the Mid-Columbia Symphony, the Girl Scouts, and teaching Bible and Sunday School at Central United Protestant Church. In those years, Sue was a vintage homemaker – supporting Janet’s activities, cooking, sewing, knitting, gardening, doing more with less. Sue and Bob had many friends and enjoyed entertaining with elegant dinner parties, playing bridge, and golfing at the Tri-Cities Country Club. Following Bob’s death in 1974, Sue began a second career as a realtor which would span 33 years. She worked for several firms, including Coldwell Banker. Sue earned many awards in her real estate career. She loved traveling to annual meetings abroad with the International Real Estate Federation. Sue’s strong work ethic, integrity and professionalism resulted in many referrals. Mostly she enjoyed meeting new people and matching them to their dream homes. Sue was introduced to Sam Volpentest by chance at a Christmas luncheon in 1986. Sam called her that evening and asked what she liked to do. She told him she liked going to dinner and dancing. It was the start of a 19-year companionship lasting until his death in 2005 at the age of 101. Together Sue and Sam enjoyed community social events, dinners with friends, Sunday morning breakfasts, travel, even some golf as Sam aimed to shoot his age, and most importantly, their nightly conversations always beginning with “How was your day?” Sue was honored to be recognized as a Daughter of Hanford in 2015, a multi-media project that tells the stories of women creating Hanford’s nuclear legacy. Sue also enjoyed participating in the Hanford History Project sponsored by WSU Tri-Cities. Sue was preceded in death by her husband Bob and her two brothers who remained on the Texas homestead all of their lives. She is survived by her daughter, Janet White (Max) and two granddaughters, Brittany Paetel and Jaime White, both of whom brought great joy to her life. She will be deeply missed and remembered as a caring and loving mother, grandmother, wife, sister and friend. The family wishes to express their heartfelt gratitude to the caregivers from Family Resource Home Care, the Chaplaincy palliative and hospice care staff, and the wonderful assisted living staff at Brookdale Canyon Lakes which Sue called home for the past seven years. A family graveside service has already taken place at Desert Lawn Memorial Park. Memorial contributions may be made to Chaplaincy Health Care, 1480 Fowler St., Richland WA 99352 or online.

Sue Olson, 97, a long-time Tri-Cities resident, passed away peacefully on November 27, 2018 surrounded by her loving family. Born on March 12, 1921, in Claude, Texas, Mary Sue was the daughter of Charles Walker and Lyda Hathorn. She grew up... View Obituary & Service Information

The family of Mary "Sue" Olson created this Life Tributes page to make it easy to share your memories.