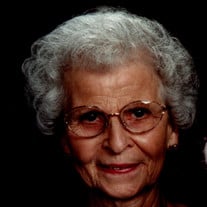 On October 13, 2019, Mary Virginia Ninemire's Lord Jesus wrapped his loving arms around her and brought her home. Mary passed away in Kennewick, WA, at the age of 90. She was born on November 10, 1928, in Pilot Grove, Missouri, to Shelby and Rosie Salmon. Mary was from a large family and had fifteen siblings with whom she remained close throughout her life. Mary loved to tell stories about her family, like the time her sister Jennet took a black headed snake out from underneath a chicken. Jennet cut the snake open and removed the eggs from the snake. She then put the eggs back under the chicken where they later hatched. Mary is survived by three of her sisters, Nina Nickerman, Rose Jean Bennett, and Clara Ninemire. In 1949, Mary met the love of her life, Wayne Ninemire, and they were married in 1950. Their marriage lasted 56 years until Wayne's passing in 2006. Together they raised three children: Steve Ninemire (Tsuyoshi), Tom Ninemire (Tracey), Tammy Lascheid (David). Mary is survived by her children and also three grandchildren: Robert Lascheid, Adam Lascheid, and Amanda Ninemire. Mary loved her children and grandchildren with all her heart! Mary relished spending time at the family cabin on Horseshoe Lake where she liked to fish, hike, and go boating with family members. She once found a way to bake a birthday cake using the cabin's old wood stove. Mary enjoyed volunteering. While a young mother, she joined her best friend, Mary Louise Samaniego, in leading a local Girl Scout Troop. She loved to bake and spent many hours baking items for her church. She especially enjoyed making popcorn balls and Yule Cake to sell at bake sales. Later on, Mary became a volunteer for Our Lady of Lourdes Auxiliary where she took magazines to patients and brought pet therapy to them. This involved picking up animals from the local shelter and taking them around to visit patients. There will be a viewing at Mueller's Tri-Cities Funeral Home in Kennewick on Thursday, October 24, from 4:00 to 8:00 pm. A Rosary will be held during this time from 6:00 to 6:30 pm. A Funeral Mass will be held at Saint Joseph's Catholic Church (Small Church) on Friday, October 25, at 10:00 am. Following graveyard services, a reception will be held in the upstairs meeting room of the Parish Office. "And the God of all grace, who called you to his eternal glory in Christ, after you have suffered a little while, will himself restore you and make you strong, firm and steadfast." 1 Peter 5:10

On October 13, 2019, Mary Virginia Ninemire's Lord Jesus wrapped his loving arms around her and brought her home. Mary passed away in Kennewick, WA, at the age of 90. She was born on November 10, 1928, in Pilot Grove, Missouri, to Shelby... View Obituary & Service Information

The family of Mary Virginia Ninemire created this Life Tributes page to make it easy to share your memories.