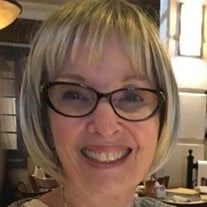 Mary Elizabeth Houston of Kennewick, WA lost her second battle with cancer on October 27, 2021 in Trios Hospital. She was born on April 7, 1939 to James and Margaret (Connor) Haller in Pittsburgh, PA. She attended St Andrew's School, St Francis DeSales High School and Duquesne University in Pittsburgh, where she was a member of Alpha Phi Omicron Sorority. It was at Duquesne that she met her husband of 59 years, Dennis Houston. They were married on July 14, 1962 at St Andrews Church in Pittsburgh. They began married life at Ft Knox, KY, where Dennis was stationed. In 1963, Dennis was assigned to the 65th Medical Group in Korea. Mary was not allowed to accompany him in an official way, but she found a way to go to Korea to be with her husband. This was the first of many adventures to come. While in Korea, Mary worked for Korea Church World Service, and even appeared in a Korean Movie. In 1965, when Dennis left the service, they moved to Pittsburgh, where Dennis worked for Westinghouse Electric Co. There she gave birth to her two daughters, Nan E. Houston and Leah A. Houston. In 1971, the family moved to Kennewick, WA, where their son, Daniel H. Houston, was born. After 11 years in Kennewick, in 1982, the family moved to Jubail, Saudi Arabia where Dennis worked for Bechtel. Life in Saudi allowed them to travel extensively though Europe, Africa, and Asia all the while keeping ties to the Tri-Cities. In 1987, they returned to the USA and settled in Walnut Creek, CA. In 1989, they moved again to Augusta, GA and in 1994 they returned to Kennewick where Mary became a beloved Chaplain at Lourdes Hospital in Pasco. She retired from Lourdes in 2009, expecting to enjoy the next phase of her life spoiling her grandchildren. Those plans were disrupted by her first bout of cancer. She recovered and resumed her life only to be struck down again in 2019. Mary was a fighter and, sustained by her faith and the friendship of her cadre of very special friends, battled for the next two years. Mary is survived by her husband of 59 years, Dennis; her brother, James Haller (Barbara) of Pittsburgh PA; daughters, Nan (Erik Anderson), of Seattle and Leah (Tobias Bunyan) of Peacehaven, Sussex England; and her son Daniel (Amy) of Lake Stevens, WA. She is also survived by her granddaughters, Mia and Nicola Anderson of Seattle, and her grandsons, Alfie Bunyan of Peacehaven, England and Kellan Houston of Lake Stevens, WA and by numerous nieces and nephews. She will be mourned by the many friends she made both in the Tri-Cities and around the world in every place she lived. Mary was a long-time parishioner at St Joseph's Catholic Church in Kennewick and an Associate of the Sisters of St Joseph of Carondolet. Funeral Services will be at St Joseph's Church in Kennewick on Thursday, November 11, 2021. Rosary will be at 10 AM and Mass will begin at 11 AM with Fr Richard Sedlacek, officiating. Interment will be immediately after at the Columbarium at St Joseph's.

The family of Mary Elizabeth Houston created this Life Tributes page to make it easy to share your memories.