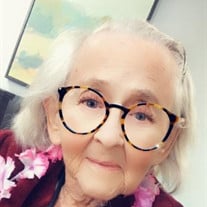 MARY JUNE CLINEBELL AKA JUNE S. CLINEBELL Mary June Stastny, also known as June S. Clinebell, passed away, May 6, 2021. She, heard the Lord calling her saying, "June, we are ready for you," and she answered his call and left this world peaceably. She was 100 years old. She was born January 22, 1921, the daughter of John and Ruth Stastny, on the family farm, 20 miles west of Upton, WY. Upton is a small village in Weston County. It boasted of a general store, saloon, blacksmith shop and a school. June attended a small school in the farming community where she lived until she was 12 years old. The school had 8 students. When a family, having 6 of the students, sold their farm and moved away, leaving the school with only Mary June and her sister, Ruth, her family was unable to afford a teacher, so the only solution was to enroll them in the school in Upton. John, Junes' father, located a one room cabin, which he rented for the girls. June was 12 and Ruth was 5. Ruth started school before she was 6, to be with June. Mama would bring us to school on Monday morning, then she would go to our cabin, bake bread and prepare food for them for the school week before leaving the girls alone until she returned on the next Friday to take them home. Ruthie and I would live there by ourselves until Friday afternoon when Mama would come back for us. We did this for a little over 2 years and when a new family moved into the farming community where our farm was located. They had 4 school age children, so daddy and their parents were able to hire a teacher for our own school. One night, while Ruthie and I were living in the cabin in Upton, a couple of drunken sheepherders came to the cabin wanting to come in and "talk" to us. But we knew what they wanted, so when we said no to them through a closed door, they threatened to break the door down. June said I yelled at them, "We have sharp butcher knives and we will cut anything we can cut if you try that." The drunken men thought the risk was more than they wanted to take and went back to the saloon. June Married Gerald Clinebell in Custer County, Custer South Dakota, May 15th, 1939. Gerald, or Jerry, as he preferred to be called, joined the Army in 1942. He served until he was discharged in 1945. Jerry heard there were good paying jobs in California so he left WY for California, promising to call for June as soon as he was able to get a job and a place for them to live. June was about 5 months pregnant with Bonnie when Jerry said he had found a place for them. Driving an old Jalopy which had no spare tire, very little money, a soon birthing of a baby, she started for California. Somewhere along the way she had a flat tire and no spare. A kind elderly farmer loaned her a tire to get to the next town, which was a couple of miles away. There she was, stranded at a service station with no spare tire and only enough money for gas to California (she had brought along some home canned food items to eat during the trip). She said she prayed, "OH LORD, HELP!" A few minutes later, a man in a suit came out of the station and asked her, "Are you the lady needing a tire?" "Yes, she told him." Then the man said, "The station man is getting you a tire now. Have a safe trip." She made it the rest of the way without incident. Bonnie Ilene Clinebell was born about 2 months later, July 28, 1948. They left California the next year as they heard Hanford was hiring workers. August 16th, 1950, Vern David Clinebell was born in Kennewick WA. During this same year, Jerry built the family home on Clearwater Ave, Kennewick WA. June supplemented the family income by working as a cook at Kennewick General Hospital. She worked for KGH for 38 years. June is survived by her sister, Ruth Wright, and nieces, nephews and cousins too numerous to mention here. She was preceded in death by her husband, Gerald, her son, Vern, "Bucky," and her daughter, Bonnie. John Stastny was a devout Christian man and required Bible principles to be lived in his household. June said, "I made a decision to follow the Lord at about 6 years old, and I never deviated from that decision all my life." She said, "If I had my life to live again, I doubt I would change much."

MARY JUNE CLINEBELL AKA JUNE S. CLINEBELL Mary June Stastny, also known as June S. Clinebell, passed away, May 6, 2021. She, heard the Lord calling her saying, "June, we are ready for you," and she answered his call and left this world peaceably.... View Obituary & Service Information

The family of Mary June Clinebell created this Life Tributes page to make it easy to share your memories.