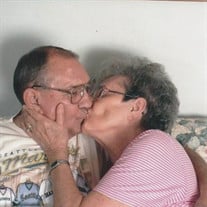 Marvin Frederick Kimber was born August 1st, 1935 in Great Bend, Kansas to Warren J. Kimber and Edna Ida Trauer, and peacefully passed away surrounded by family on August 23rd, 2020 in Kennewick, Washington. He moved to Pasco, Washington in 1961. He was employed by Boise Cascade as a truck driver and was retired for 20 years. Prior to working at Boise Cascade, he was employed at Boeing and also served his country in the Army Airborne, stationed in Germany for 2 years. He is survived by his step-son David Bragg, daughter-in-law Adriana Bragg, grand-daughters Vanessa, Nicole, and Lexi Bragg, and great-grandson Jiovanni, all of Benton City. He is also survived by several nieces, nephews, and cousins. He was proceeded in death by his parents, sister Betty Squire, step-daughter Debbie Bragg, and his beloved wife and companion Maxine Kimber, who passed in 2018. Marvin was blessed with a tremendous sense of humor and was very quick witted. He was a hard-working man who was totally devoted to his wife whom he described as the love of his life. He worshipped the ground she walked on and together they were inseparable in life and are now united in death. He provided a comfortable and happy life for his wife. We are grateful for the wonderful, compassionate care provided in his last days by the staff and doctors at Kadlec Hospital and the Chaplaincy Hospice House. We also thank Jenny Roos, Sammy and Larry Trotter, and Wes and Joyce McIntyre for their love and service.

The family of Marvin Fredrick Kimber created this Life Tributes page to make it easy to share your memories.